Peter Sutoris ’11, originally from Banska Bystrica, Slovakia, has been named a Gates Cambridge Scholar for 2015. Sutoris, who is currently teaching in Nepal, plans to use the scholarship to earn a Master of Philosophy degree in education at Cambridge University. 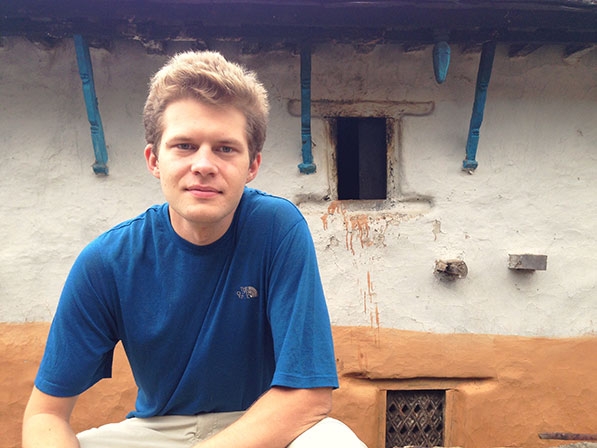 The Gates Cambridge Scholarship was created in 2000 through an endowment gift from the Bill and Melinda Gates Foundation to Cambridge University that aims “to build a global network of future leaders committed to improving the lives of others,” according to the program’s website. This year the program selected 94 scholars—40 from the United States and 54 from 28 other countries—to pursue advanced study at Cambridge.

“Peter has made the entire Dartmouth community proud,” says President Phil Hanlon ’77. “He has demonstrated a deep intellectual and moral curiosity that exemplifies the best of Dartmouth, and which the Gates Cambridge Trust has recognized.”

Sutoris is the second Dartmouth graduate to receive the award; the first was Ingrid Nelson ’05 in 2005.

“Collectively, these professors sensitized me to lots of ideas I had not been fully mindful of before coming to Dartmouth—the suffering of others, the meaning of social justice, the importance of generosity and ethics,” Sutoris says. “Those are the biggest lessons that have stayed with me, and I am positive that the Gates or any of my other accomplishments would not have happened without these mentors.”

“The Gates Cambridge Scholarship offers some of the best students in the world the opportunity to grow as scholars and leaders,” says Provost Carolyn Dever. “It is gratifying to see Dartmouth alumni like Peter recognized in this international arena.”

While at Cambridge, Sutoris plans to research the scalability of educational reforms across diverse cultures, with a focus on South Asia. “The Faculty of Education in Cambridge is unique in its commitment to the cause of improving international education through rigorous scholarly research, and their focus on South Asia in particular aligns very well with my own interests and experiences,” he says.

A Presidential Scholar and a Rufus Choate Scholar, he was able to take advantage of a number of Dartmouth scholarship and fellowship opportunities, both as an undergraduate and as a recent alumnus, including the Raynolds International Expedition Grant, the Lombard Public Service Fellowship, the Dickey International Internship Grant, the Paul K. Richter and Evalyn E. Cook Richter Memorial Grant, the Blair Watson Film Grant, and a Dartmouth General Research Fellowship.

His senior thesis in history received the Steven S. Rosenthal Prize for best thesis in nonwestern history. That thesis, on government-sponsored documentaries in India during the postcolonial period, is the basis of a forthcoming book, Visions of Development, which is being published by Hurst & Co. this year.

Among his key experiences at Dartmouth are the two winter terms Sutoris spent in the Marshall Islands, one teaching high school world history and the other creating a documentary film about development and education on the islands. That film, The Undiscovered Country, has been released internationally and used in courses at Dartmouth and in Japan. He also spent a summer in Mostar, Bosnia and Herzegovina, helping to produce Shakespeare plays with Garrod’s international youth theater program, Youth Bridge Global.

He has also worked as a research consultant with PharmaSecure Inc., a public health social enterprise in India co-founded by Nathan Sigworth ’07 and Taylor Thompson ’08, and has served as a volunteer with the United World Colleges national committees in Nepal, Slovakia, and the Marshall Islands. He is a 2007 alumnus of the United World College of the Atlantic in Wales, UK.

Sutoris says the Gates Cambridge award “means an opportunity to pursue my research under the guidance of like-minded scholars who see academia as a tool for social change. It also means being a part of the Gates Cambridge community, which brings together scholars from all over the globe who are committed to improving the lives of others through their work.”

“The Gates Cambridge has quickly become one of the most competitive international awards,” says Jessica Smolin, assistant dean for scholarship advising. “I’m thrilled for Peter, and I encourage all students and alumni who want to learn more about the Gates—and other international and national scholarship opportunities—to make an appointment with me.”