Scientists’ First Glimpse Inside a Supernova

Dartmouth astronomer Robert Fesen and Dan Milisavljevic, a former student of his, have peered inside the remains of a massive star that exploded 340 years ago, discovering new evidence of how this supernova came into being and what it left behind. 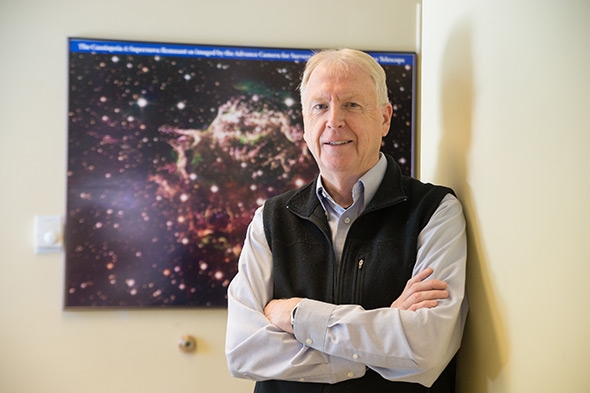 Professor of Physics and Astronomy Rob Fesen is an observational astronomer specializing in supernovas and their remnants. (Photo by Eli Burakian ’00)

The supernova remnant, known as Cas A, is the wreckage of a star in the constellation Cassiopeia. It is within our own Milky Way galaxy, young enough and near enough to permit detailed studies. In the Jan. 30 issue of the journal Science, the two astronomers report on their research, which resulted in a better understanding of what happens at the end of a star’s life, as well as how these processes figure into the origin of planets like our own.

“If the stars did not blow up, we would not have planets rich in nitrogen, oxygen, silicon, calcium—all the elements that make a planet possible,” Fesen says. “Otherwise, you couldn’t get that stuff out into space where new stars evolve. So understanding these things helps deduce the true origins of all these elements in planets like the Earth.”

Fesen and Milisavljevic found a curious configuration in the remnant’s interior—large bubble-like voids that give the appearance of Swiss cheese. The “bubbles,” up to six light-years in diameter, are within a luminous exterior shell that has a diameter of approximately 12 light-years. (A light-year is approximately 6 trillion miles.)

Other scientists had suggested the presence of these cavernous structures, but Fesen says the new findings conclusively show that they really do exist. Fesen has been studying Cas A for 20 years; now he and Milisavljevic have produced the first three-dimensional map of its interior structure, showing a complex and highly organized configuration.

“This is the first time we have seen a complete image of the interior. What creates those bubbles in the first place is radioactive nickel. Its radiation heats up nonradioactive gas and blows bubbles and pushes all the nonradioactive material off to the sides,” says Fesen. This mixing and motion of the nickel precedes the outward blast of this material.

Supernovas are the biggest explosions in the universe, but when the blast occurred in Cassiopeia around the year 1680, it apparently went unnoticed. Fesen dug through archives on both sides of the Atlantic, but came up empty-handed. He was not surprised, since Cas A was dim to the eye, low in the sky, and likely obscured by trees or buildings. “A lot of the observers in the 17th century were not people who were staying up all night to watch the sky. They had other things to do. They had jobs,” he says. 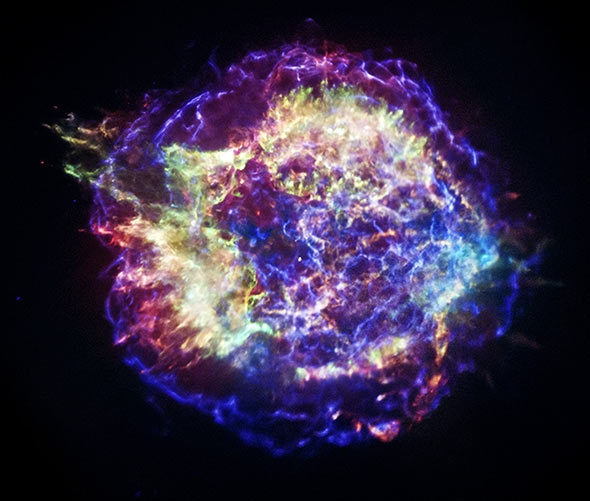 The supernova remnant Cas A is shown in profile in an image based on data from ground-based telescope observations and the Chandra X-ray Observatory. (Photo courtesy of NASA/CXC/SAO)

Fesen says Cas A is bright in the radio wavelengths and actually outshines the Sun in that part of the spectrum, but it is hard to see because there is a lot of dust in the galaxy between the Earth and the remnant.

Though Cas A is relatively close, it is in the plane of our flat, pinwheel galaxy. Without the interposing dust, it would be around 100 times brighter in the optical wavelengths. The researchers employed imaging in the near-infrared wavelengths, which are particularly good at penetrating dust. They looked at Cas A using an extremely sensitive infrared detector at the Kitt Peak National Observatory in Arizona.

Combining their infrared readings with X-ray data from the orbital Chandra X-ray Observatory enabled the two astronomers to construct their unprecedented map of Cas A. Chandra is operated by the Harvard-Smithsonian Center for Astrophysics, where Milisavljevic is now a postdoctoral fellow.

In their Science paper, Fesen and Milisavljevic say that the evolution of Cas A’s exterior shell can be traced to the supernova’s original nickel-rich, high-velocity, outward blast. It collided with the surrounding interstellar medium (gas, dust, cosmic rays) and bounced back, heating and illuminating the perimeter of the remnant.

“Cas A’s metal-rich debris is arranged in ring-like structures that together form a roughly spherical shell,” the authors write. This is what makes the supernova remnant visible, but only through the specialized instruments they employed.