Sean Nolon Will Be Head of Ombuds Office

Sean Nolon, a professor of law and director of the dispute resolution program at Vermont Law School, has been named the head of Dartmouth’s Ombuds Office. He begins work May 4. 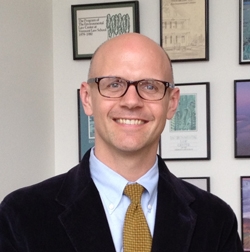 Sean Nolon will begin his work at the College on May 4. (Photo courtesy of Sean Nolon)

The ombuds position, established to offer staff an independent, neutral, and confidential resource to assist with preventing, resolving, and managing conflict, has been vacant since the June retirement of Nolon’s predecessor, Mary Childers. In the interim, the Office of Human Resources and the Faculty/Employee Assistance Program (known as FEAP) have addressed inquiries.

“The purpose of the Ombuds Office,” Nolon says, ”is to serve as an informal dispute resolution resource in the institution—to give people options for creative problem-solving by speaking confidentially with someone who’s neutral and independent.“

Nolon earned his BA from Cornell University in 1992 and a JD from Pace University School of Law in 1997. He was a litigator at Melito & Adolfsen in New York City and served as director of the Land Use Law Center at Pace before joining Vermont Law School in 2008. His teaching and scholarship focus on negotiation, community mediation, and public policy dispute resolution.

”We are delighted to have Sean as our new ombudsman,“ says President Phil Hanlon ’77. ”He has the skills and experience to be an exceptional resource for empowering Dartmouth staff to work toward resolving conflicts in an environment of civility and respect.“

While the ombudsman reports to the president’s office, the position is independent and all exchanges with employees are strictly confidential. Since it was established in 2007, the position has been part time. Nolon will serve as Dartmouth’s ombudsman part time and will continue teaching at Vermont Law School.

Childers re-established the Ombuds Office under then-President James Wright in 2007. Prior to that, the last Dartmouth ombudsperson served during the administration of President John Kemeny, which ended in 1981.

The office was created to assist non-union employees who are troubled by a workplace or campus issue. The ombudsman helps people resolve conflicts by identifying a range of possible actions.

”One of the primary purposes of the office is to give people a place to go where they can confidentially discuss workplace troubles and possible options for resolutions,“ Nolon says.

The office can also help employees decide whether to file a formal grievance. The Ombuds Office is in administrative offices on the second floor of the Church of Christ, located on North College Street, and can be reached by calling (603) 646-9872.