DEN—the Dartmouth Entrepreneurial Network—continues its spring term “Six to Start” series, a set of workshops designed to guide entrepreneurs through the start-up process from idea generation to funding. The sessions take place at 4:30 p.m. on Thursdays (the next one is set for April 30) in the DEN Innovation Center at 4 Currier Place. 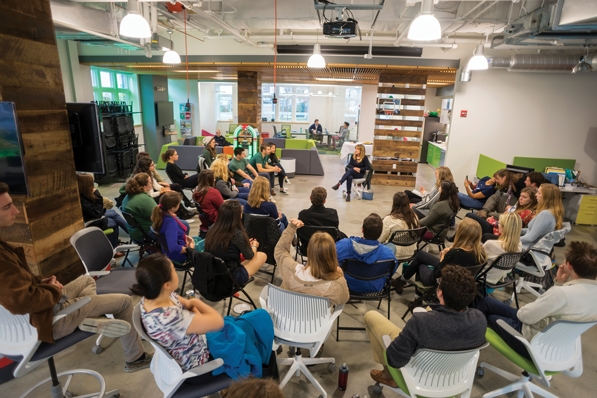 The Dartmouth Entrepreneurial Network is hosting a number of upcoming workshops. (Photo by Eli Burakian ’00)

DEN is also running a series of workshops on sales, led by entrepreneur Katerina Kekola. The next session in this series takes place at 5 p.m. on Monday, May 4, in the DEN Innovation Center. And at 5 p.m. on Friday, May 1, DEN launches its “Meet the Founders” series in the Tuck School’s Raether McLaughlin Auditorium.

Thursday, April 30: Law Day at Dartmouth brings Heather Gerken, a professor at Yale Law School, to present the Stephen R. Volk ’57 Lecture at 4:30 p.m. in Room 003 at the Rockefeller Center. Gerken, a specialist in election and constitutional law, will speak on “Dark Money and Shadow Parties: The Real Problem in Campaign Finance.”

Friday, May 1: Law Day events continue with the panel “Money in Politics: A Discussion of Recent Developments.” Participants for the session, which begins at 3 p.m. in Room 003 at the Rockefeller Center, include John M. Greabe ’85 of the University of New Hampshire School of Law; Gilles Bissonette of the New Hampshire Civil Liberties Union; Heather Gerken of Yale Law School; and Dan Weeks of Open Democracy.

Friday, May 1: The weekly combined conservative and reform Shabbat Service is scheduled for 6 p.m. at the Roth Center for Jewish Life.

Saturday, May 2: “Back to Class,” a series of presentations from Thayer School of Engineering faculty on breakthroughs in energy, medicine, and complex systems, starts at 9 a.m. in Thayer’s Spanos Auditorium. The sessions are part of Thayer’s annual Alumni Weekend.

Saturday, May 2: The Dartmouth College Wind Ensemble presents a concert recreating the “sound world” of early 20th century Paris, featuring Igor Stravinsky’s 1924 Concerto for Piano and Wind Instruments as well as other pieces from composers working in the same artistic milieu. The performance begins at 8 p.m. in the Hopkins Center’s Spaulding Auditorium.

Sunday, May 3: This term, student preachers from the Class of 2015 at the Tucker Foundation-sponsored Sunday night chapel service take on the theme “Dear Dartmouth,” writing a letter to the College reflecting on the past four years. Services take place at 5 p.m. every Sunday in Rollins Chapel.

Monday, May 4: This Monday and every Monday during spring term, learn and practice the Argentine tango at classes and practica sessions at 7:30 p.m. in the Sarner Underground in the Collis Center.

Tuesday, May 5: Asoke Kumar Mukerji, India’s ambassador to the United Nations, speaks on “Transforming India: Development and Diplomacy,” at 4:30 p.m. in Haldeman 41 at the Kreindler Conference Hall.

Tuesday, May 5: As part of the Mahler Lecture Series, Michael Meredith, a principal of the architectural practice MOS, speaks at 4:30 p.m. in the Loew Auditorium at the Black Family Visual Arts Center.

Tuesday, May 5: Dartmouth’s Ethics Institute, the Leslie Center for the Humanities, Tuck School of Business, and the Tucker Foundation together sponsor a screening of the film Inequality for All, followed by a panel discussion on “The Ethics of Income Inequality,” featuring writers Richard Parker and Ron Suskind.

Wednesday, May 6: Lectures and seminars on campus include “Science Innovation and National Security,” “Karski: Holocaust Hero,” and “Catholic Theology after Kierkegaard.”