Writing From the Inside: Montgomery Fellow Bernardine Evaristo

The latest Montgomery Fellow is London-based novelist, poet, essayist, and playwright Bernardine Evaristo, whose award-winning work experiments with genre and form to create vivid evocations of character—from five generations of her family tree to a gay septuagenarian from Antigua. Evaristo will be in residence throughout the spring and is teaching a creative writing course in the English department. Her public lecture, “On Becoming a Writer,” will be at 4:30 p.m. Tuesday, April 21, in Kriendler Auditorium, 041 Haldeman Center. 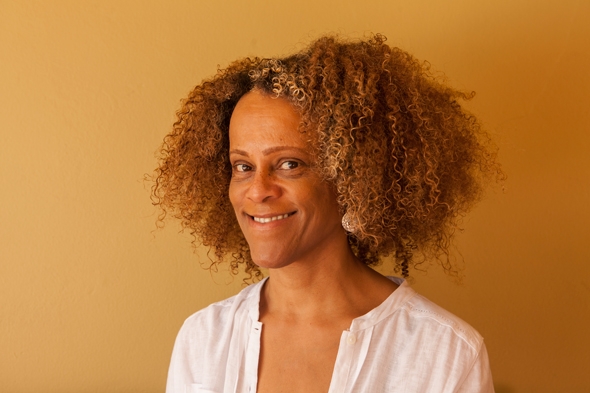 How did you become a writer?
Through being an actor. As a child I went to a youth theater, and then I went to drama school and began to write for theater. In the ’70s and early ’80s, there weren’t plays by or about black British women, so it was almost a necessity that we create our own. I was acting, running a theater company—and then I wanted to see if I could write books.

Your first book, Lara, is a fictionalized history of your family.
Actually my first book was a collection of poems, but I didn’t really like it. Now I don’t mind, but I was trying to find my voice, and didn’t want people to be introduced to my work through that attempt. Lara was the first book I was proud of. It took five years to write, and spanned 150 years and three continents, because my family is from England and Nigeria and Brazil and Ireland and Germany.

How did you find the voices of ancestors you never met?
I didn’t know my grandparents on my father’s side, but I had a photograph of my grandmother from Nigeria, and was able to imagine her life and then try to get inside her skin and write her from the inside. Which is how I write first-person narratives. You have whatever information you have, and then you have to let go of yourself and allow them to take over.

What was it like to write from the perspective of your mother’s mother, who disapproved of your parents’ marriage?
My father is Nigerian and my mother is English. My grandmother was working class, London-born of Irish descent, and grew up poor. She put all her dreams into my mother, and then my mother went and did something, for my grandmother, unbelievably bad, which was to bring home a black man. But when my sister was born, she fell in love with her, and that started to heal the rift. There were eight of us, and we used to go every weekend to see her. But she did not have any photographs of us in the house, which says that part of her was still ashamed of us. Writing her as a character was cathartic, because I was able to understand where she came from and have empathy for her.

Your recent novel, Mr. Loverman, about a closeted 74-year-old Antiguan man in London, was inspired by a photograph?
I happened to be in a workshop, and we had to choose from photographs and write in the voice of that character. I picked one of this older Caribbean guy in a 1950s suit and hat. When I started to write, the character of Barrington emerged. I was excited, and I went home and said, ‘OK, let me see if I can develop him.’ Before I knew it I had a novel.

Barrington’s wife starts off unsympathetic but becomes more complex.
Carmel is homophobic. But I didn’t want to create cardboard cutouts, goodies and baddies. Carmel was at risk of being a baddie, because at first you only see her through the eyes of Barrington, with whom she has a toxic relationship. It was only through revision that Carmel’s sections emerged, and we were able to see things from her point of view.

What do you read?
My students’ work. [Laughs.] When I was beginning to become a writer, African-American women writers were very important to me, because they placed black women’s lives center stage. The fiction of Africa and the African diaspora was predominantly male up until maybe the ’70s, and then we had this upsurge of writers like Alice Walker, Toni Morrison, Gloria Naylor, Audre Lorde, Maya Angelou. And then I started to read everything from everybody. The Road by Cormac McCarthy is one of my favorites. Derek Walcott is probably my favorite poet. The Remains of the Day by Kazuo Ishiguro. For me often it will be one book by an author that I treasure.

How do you teach creative writing?
You can’t teach talent, but you can nurture it. In a workshop, you give people space and permission to write, and support and feedback on their writing. They can be taught technique—language, characterization, point of view, setting, dialogue. You show how characters need to be flawed, how they need to want something and then you don’t give them what they want. All these components are thrown into the mix, and students will start to create fiction.

Will you be working on a new project while you’re here?
No comment. [Laughs] It’s not wise to talk about works in progress. You have to protect an idea before it’s fully developed.

What does it mean to you to be at Dartmouth as a Montgomery Fellow?
As a crazy Londoner used to running around with millions of other people, just being in such a scenic, leisurely environment is great. The Montgomery House is amazing, a perfect place to write. I’m grateful to be here.

The Montgomery endowment, which invites exceptional individuals to the College to live, work, and share their perspectives as members of the community, was established in 1977 through a gift of Kenneth ’25 and Harle Montgomery.