A total of 1,115 students have accepted the College’s offer of admission this year, including the highest percentage of first-generation college students in eight years.

Fourteen percent of the students in the Class of 2019 will be the first in their families to attend college, says Maria Laskaris ’84, dean of Admissions and Financial Aid. 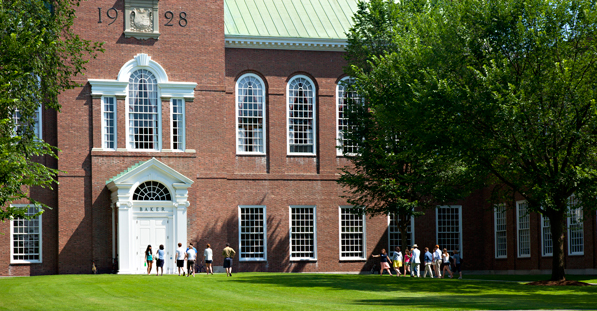 Among the incoming students, 91 percent rank in the top 10 percent of their graduating class. (Photo by Joseph Mehling ’69)

“We’ve made important progress in reaching first-generation students, and it’s paying off,” says Laskaris. “In addition, the dedication of the faculty and staff who work closely with Dartmouth’s First Year Student Enrichment Program (FYSEP) helps ensure that the students we invite to join our community realize their tremendous potential.”

The incoming class also includes the largest-ever percentage of Asian American students (19.6 percent) and students from the West Coast (23.6 percent). Just over 40 percent of the class members identify as students of color, and 8.3 percent hold citizenship in countries other than the United States.

Among the incoming students, 91 percent rank in the top 10 percent of their graduating class, with mean SAT scores of 717 in critical reading, 722 in math, and 722 in writing. Nearly 56 percent attended public high schools.

“We are very pleased with the students who will enroll at Dartmouth this fall and are confident that their abilities, perspectives, and experiences will enrich this community for all of us,” Laskaris says.

This year’s yield—the percentage of students who will matriculate at Dartmouth from the pool of those offered admission—is 50.4 percent. The yield percentage tracks closely with the trend of the past five years, Laskaris says.

In making their college choice, more than 1,000 accepted students and their families visited campus during the month of April for one- and two-day Dimensions of Dartmouth events, and hundreds of others participated in events hosted by alumni clubs in cities around the world, including Atlanta, Chicago, Tokyo, and Seoul, South Korea.

The College offered 2,213 students acceptance to the Class of 2019, out of 20,504 applicants, representing an admission rate of 10.8 percent. The acceptance offers include 483 students admitted in December 2014 through the early decision process.