He’s from a large city in Lithuania and she grew up in suburban southern New Jersey. But despite their different backgrounds, Dovydas Šakinis ’16 and Taylor Ng ’17 have a few things in common. They are both double majors (economics and anthropology for her, and economics and Russian area studies for him), they both started playing tennis at age 5, and they were both recently voted the Ivy League’s Tennis Players of the Year. 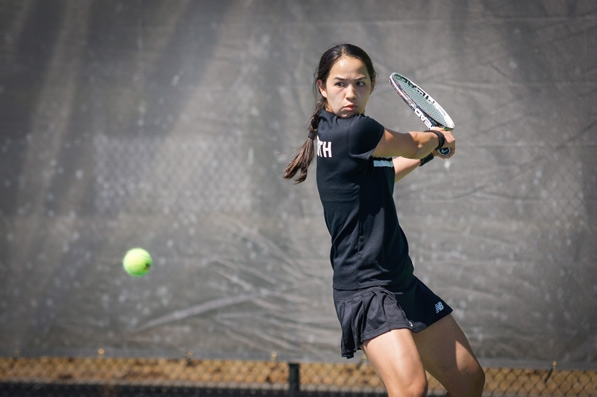 Taylor Ng ’17 is the 2015 Ivy League Women’s Tennis Player of the Year and was recently named the Intercollegiate Tennis Association (ITA) Northeast Regional Player to Watch. (Photo by Joshua Renaud ’17)

And thanks to being ranked among the country’s top 125 players, they both earned spots in the NCAA Division I Singles Championship, which will be contested from May 20 through 25 at Baylor University in Waco, Texas. Šakinis is the third Dartmouth men’s tennis player to qualify for the tourney (Matt Semler ’92 and Dan Coakley ’94 preceded him in 1992 and 1994, respectively), while Ng is the first women’s tennis player to represent the Big Green in the NCAA singles tournament.

Ng and her teammates achieved another program first when Dartmouth qualified for the 2015 NCAA Division I Women’s Tennis Championship. The Big Green, nationally-ranked No. 31, downed No. 49 William & Mary 4-1 before falling 4-0 to No. 2 University of North Carolina in the round of 32 on May 10.

While Ng and Šakinis have both ended up with a spot on the national stage, their paths to tennis excellence have been quite different. Ng was a multi-sport athlete throughout her youth. She played Little League boys’ baseball until seventh grade, and was a tennis and lacrosse standout at Haddonfield Memorial High School, winning the state high school singles title her junior year and notching more than 100 career goals as a lacrosse attacker. However, since she did not play a year-round junior tennis tournament schedule, Ng’s national ranking wasn’t at the level of most Division I college players. But after traveling to New Jersey to watch her play, Dartmouth head women’s tennis coach Bob Dallis promptly offered Ng a spot in his 2017 recruiting class.

“Taylor was clearly a superlative athlete,” says Dallis. “But she’s also very focused and an incredibly hard worker. Since arriving at Dartmouth, she’s been improving every week. She went 6-1 in the Ivy League at No. 2 singles last year, and this year Taylor was undefeated at No. 1 in league play and beat Princeton’s 2014 Ivy League Player of the Year twice. That’s a testament to all the work she’s put in.”

Ng also puts in the work in the classroom, and will be performing research this summer and fall for economics professor Doug Irwin as a James O. Freedman Presidential Scholar.

President Phil Hanlon ’77 was impressed when she was in his mathematics class in 2013, and now he and his wife, Gail Gentes, attend many Big Green tennis matches. “The section of first-year calculus in which Taylor was my student is a fast-paced course that takes off like a rocket,” President Hanlon says. “I saw in her the same focus and tenacity in the classroom that Gail and I have noted in her performance on the court, and we simply couldn’t be prouder of how far she’s pushed herself and the tremendous success she’s achieved.” 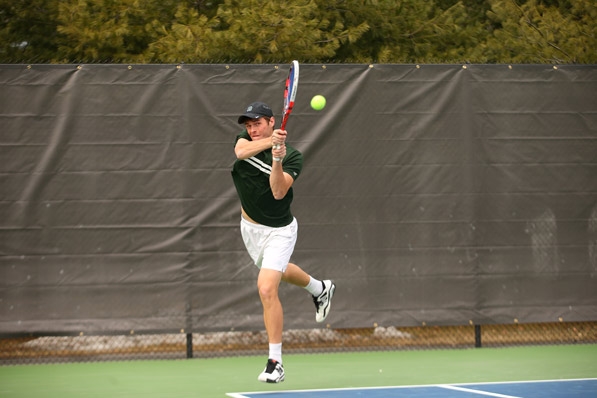 Dovydas Šakinis ’16 is the 2015 Ivy League Men’s Tennis Player of the Year. (Photo by John Ridley)

In contrast to Ng, Šakinis focused strictly on tennis as a youngster and entered Dartmouth with an Association of Tennis Professionals (ATP) world ranking of No. 808. He also played for Lithuania’s Davis Cup team during his first year at Dartmouth, helping his country earn a 4-1 victory over Cyprus in his hometown of Siauliai.

While that was a memorable moment for Šakinis, it was also a thrill this spring to lead Dartmouth to its first victory over No. 34 Harvard since 1993, cheered on by nearly 400 Big Green fans. The only disappointment this year for Šakinis, who says he “enjoys every moment with his teammates,” is that the No. 46 Big Green narrowly missed qualifying for the NCAA team tournament.

He’s looking forward, however, to representing Dartmouth at the NCAA singles championship. “I’m really happy to be one of the players in the draw and to wear a Dartmouth shirt there,” says Šakinis. “Even though we really wanted to go as a team, at least I can represent the team in this way.”

And with wins this spring over Columbia’s No. 17-ranked Winston Lin and Harvard’s No. 34-ranked Denis Nguyen, who last year reached the NCAA singles semifinal, Šakinis is capable of doing some damage in the tournament. “He can compete with anyone that he’ll play,” says head men’s tennis coach Chris Drake. “He’s big, he’s a lefty, he moves well, and his forehand is really big. So you can’t hit him off the court.”

Ng also has reason to feel confident. She’s 22-1 in singles matches this spring, and at the NCAA team tournament she was locked in a 7-5, 2-2 battle with UNC’s Jamie Loeb, the country’s 7th-ranked player. But the match was halted at that point because the Tarheels had clinched the deciding fourth match on another court.

“The NCAAs was an incredible experience for our team,” says Ng. “We played with pride and with confidence. We played with the mindset that we wanted to win the whole tournament, and I will look to do the same at individual NCAAs. But it all starts with the first match.”