Senior Lecturer in Studio Art Virginia Beahan says when President Barack Obama and Cuban President Raul Castro sat down together at the Summit of the Americas in Panama in April, it represented both an abrupt and an incredibly slow diplomatic and cultural shift for the two nations.

Virginia Beahan, a senior lecturer in studio art, is interested in helping students learn how to depict political and social change through their art. (Photo courtesy of Virginia Beahan)

Beahan, whose large-format photographs are in the collections of New York’s Metropolitan Museum of Art, the San Francisco Museum of Modern Art, and the Corcoran Gallery of Art in Washington, D.C., began photographing Cuba in 2001, the same year she began teaching in the studio art department at Dartmouth.

“As soon as I arrived in Cuba, we were greeted by billboards that, instead of advertising Marlboro cigarettes, were advertising revolution,” Beahan says. “I just loved the way history and culture were visible everywhere in the land, and so I wanted to photograph that.”

When Obama announced in December the move to restore full diplomatic relations with Cuba after more than 50 years of isolation, Beahan saw it as a culmination of many complicated, incremental changes in the attitudes and politics of both countries. She had seen the stirrings when she began her work in 2001.

“I had a growing sense that the story was always changing, it was evolving, there was pressure for things to change, and I was very interested in that possibility,” she says. 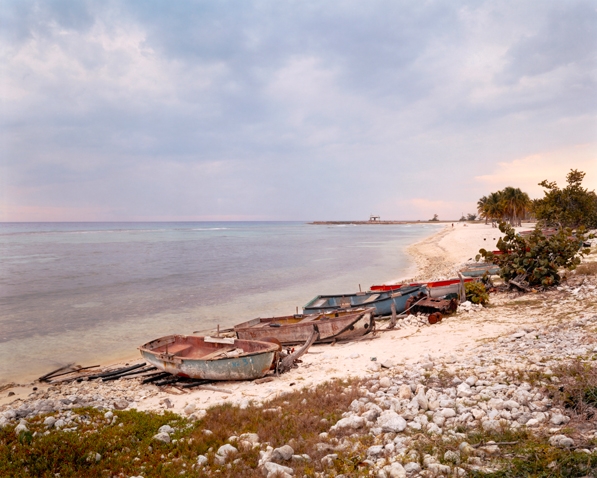 Beahan published Cuba: singing with bright tears in 2009, and has returned to the island nation twice in the years since. She says she has watched the gradual development of free enterprise as the Castro government relaxed restrictions on small businesses.

“I returned with the idea of following this emerging culture of capitalism. So I started to photograph small businesses, street vendors, people who were licensed now to offer goods and services,” she says.

As a senior lecturer in photography, Beahan is interested in helping Dartmouth students learn how to depict political and social change through their art. In the winter term 2015, she taught a class called “The Photographer as Activist.”

“It was an opportunity for students to work on issues they care about, and to explore them visually,” Beahan says. “And I encouraged them to discover what kind of voice they might have, in terms of those issues, as artists.”

The class drew a lot of interest and Beahan hopes to offer it again. “The thing that a lot of students say is they are not necessarily inclined to march around with placards or other more traditional ways of expressing views and opinions, but they would like to figure out how to do that through their artwork.”

Beahan’s latest project, “Elegy for an Ancient Sea,” is a series of photographs of the landscape around California’s Salton Sea, where the relics of resort communities stand abandoned on the desert shores of a receding, and increasingly more toxic, body of water. Beahan says that as the West struggles with a historic drought, the political and social forces at play around water rights and ecological degradation inform the work. The images will be on display this summer at the Museum of Contemporary Art San Diego in La Jolla, Calif.

And Beahan will be watching the new political and social influences that come into play in Cuba as the U.S. lifts restrictions on trade and tourism. She says the opening will most likely improve the lives of many Cubans, but she hopes change doesn’t come too quickly.

“Cuba is such a fragile place,” Beahan says, “and a tsunami of tourism coupled with U.S. desire to open markets there will not necessarily solve the myriad problems of this beautiful island. Cuban people need time to adapt, to understand the meaning and the cost of these changes, and then to formulate their own ideas about what kind of society they wish to become.“

Some of Beahan’s Cuba work is part of a group show, ”¡Viva Cuba!" at the BigTown Gallery in Rochester, Vt., through July 12.