Emily Whiting has a fondness for cathedrals, a proclivity not unrelated to her professional pursuit of computer graphics. As a PhD student at MIT, she worked with architects, an association that led to her affinity for cathedrals and their architectural geometry. 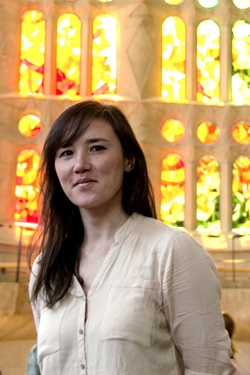 Assistant Professor Emily Whiting poses for a photo inside the cathedral of Sagrada Família, a basilica in Barcelona that is a UNESCO World Heritage Site. (Photo by Lan Wei)

“Architecture was particular fascinating to me because it is a field that brings in so many different types of expertise,” says Whiting, an assistant professor and the newest addition to the Department of Computer Science. “You have the designers thinking about the beauty and the function of spaces, and you have the engineers who are worrying about whether this building will actually stand up.”

“The designs of cathedrals came not just from the beauty of the building but also the structural form,” she says, referring to cathedrals of the Renaissance, when architects were also engineers. “The shape of vaults and domes is structural, and it is also a beautiful shape, and the two things can be related.”

Whiting says that duality of design has been lost, but that reintegration is possible, facilitated by computer applications. Computer graphics, her area of expertise, may be just the ticket.

“Computational methods can give us visualizations to help us understand how everything is working, where the problem areas are, how we can improve the structure and make it more efficient,” she says.

But efficiency is not her only objective. “I am very interested in looking at the fun side of computer graphics,” she says. “It’s important to just play, to create something that helps people release their imagination and create joyful objects.

“With the recent popularity of 3D printers, I have been fascinated by what we can do at the small scale—the scale of toys, playful objects. You are not limited to a two-dimensional visualization on a screen, but you can actually hold it in your hand and turn it around and see all the different viewpoints and angles.”

In November 2014, Whiting gave a TEDx Beacon Street presentation, “3D Printing: the Physics of Objects,” in which she explores the expansion of visualization that 3D printing affords. (Beacon Street runs through Boston’s historic neighborhood and is the city’s longest street.) 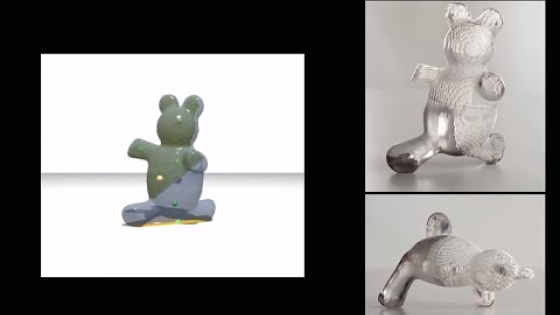 “With 3D printing we can very easily have physical prototypes of things that we only had digital versions of before,” she says. “So now we are starting to think about the actual physical properties of things.”

Whiting is interested in making things. In her first term at Dartmouth, she taught a seminar class called “Computational Fabrication.” The new Maker Movement, as it is known, has emerged as a tech-influenced, do-it-yourself community.

“People are coming up with ideas, taking it upon themselves to do things like inventing, creating a prototype in the garage, and then trying to offer it to the world. We have this full pipeline from the inception of an idea to creating it and marketing it. Technology is propagating both creativity and entrepreneurship,” she says.

Whiting observes that there are few boundaries between departments at Dartmouth, a setting that encourages creativity and innovation. For example, she was able to work with Kevin Baron, manager of the Thayer Machine Shop. He gave tours to her students, explaining all the fabrication equipment, and even acted as an adviser to them on a design project for Whiting’s class.

“I also brought my students over to the jewelry workshop in the Hopkins Center,” she says. “These connections are all just sitting around you and everyone is very willing to get involved. I think that is something that is pretty special at Dartmouth.”

Whiting says her department is encouraging a movement toward the digital arts. “We have a minor which allows students to explore how computer science can integrate with film, with animation, and maybe with painting. There is a passion here for creative exploration pursuing the applications of computer science.”