DartmouthX: One Course Underway, One Coming Back

Thayer School of Engineering Associate Professor Vicki May isn’t used to teaching 9,300 students all at once—but that’s how many she reached in week three of the six-week “The Engineering of Structures Around Us,” her DartmouthX massive open online course, or MOOC, and she’s adding more every day. 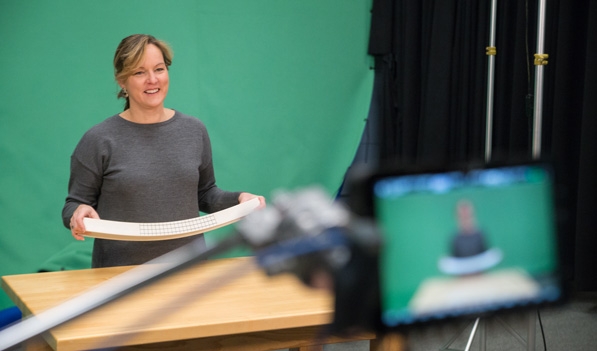 Vicki May, an associate professor at Thayer School of Engineering, during the production of her DartmouthX course, “The Engineering of Structures Around Us.” (Photo by Eli Burakian ’00)

Though the class is online, May’s students—who are participating from all over the world—are engaged in hands-on learning, actively applying key concepts of design, tension, and compression.

“People are actually sharing and building things,” says May. “They’ve tackled the ‘marshmallow challenge’ and built cardboard chairs; they are building cable-stayed bridges and working on anti-funicular forms. They are also sharing images of structures from their communities, so we’re seeing a huge range.”

This introductory engineering course is the second of four initial DartmouthX MOOCs the College is producing in conjunction with the nonprofit online learning consortium edX. The first, “Introduction to Environmental Science,” taught by Andrew Friedland, the Richard and Jane Pearl Professor in Environmental Studies, ran earlier this year.

Two other courses are expected to launch during the next 12 months: an introduction to opera, taught by Steve Swayne, the Jacob H. Strauss 1922 Professor of Music and chair of the music department; and literature of the American Renaissance, with Don Pease, the Ted and Helen Geisel Third Century Professor in the Humanities, and James “Jed” Dobson, a lecturer in writing.

“Introduction Environmental Science”: Back for More

“Introduction to Environmental Science,” or “ENVX,” was popular enough to come back for a second round this summer, with a few minor changes, beginning June 15. Registration for the summer session is now open.

The first iteration of the course ended in March. This time, the course will run for four weeks rather than the original six, and the content will be released in two sections rather than six—allowing students more flexibility to engage with the lessons on their own time.

“We wanted to be mindful of people’s summer schedules and experiment with this alternative way of releasing course material,” says Friedland.

“During the first offering of ‘ENVX,’ we offered one live office hour,” says Goudzwaard, noting that 50 people joined that session live and more than 450 people have watched the recording to date. “Learners submitted questions in advance in the discussion forums and during the live session on social media, asking about further examples of sustainable agriculture and careers in environmental science.”