Five students from Dartmouth’s undergraduate ethics bowl team traveled to the 2015 National Undergraduate Bioethics Bowl at Florida State University in Tallahassee in early April, earning a spot in the event’s semifinal round and placing fifth overall in the national competition. 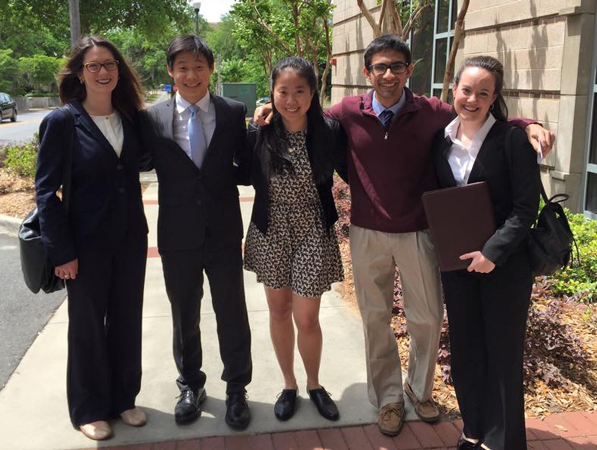 The annual event draws college and university teams from across the country; about 20 came to FSU this year, including teams from UCLA, Georgetown, and Rutgers. The competition moves through three to five rounds of initial debate, pitting two teams against each other, and concludes with a day of direct elimination debate. Each match includes a 10-minute prepared speech about an ethical issue, concluding with a recommendation for how to resolve the question presented in the case study. Overseen by the American Society for Bioethics and Humanities, the 2015 event focused on “Global Medicine, Social Justice, and Bioethics.”

Donovan worked with the team, which also includes students who, though not able to participate in the Bioethics Bowl itself, contributed to developing the group’s presentations, from January through April. “We met weekends and evenings in the conference room of the Ethics Institute,” Donovan says, “and often went long into the night. The group had many strong opinions that changed, evolved, and sometimes simply solidified over the course of a few months.”

“Extracurricular opportunities like these are one of the best parts of my job,” Donovan says. “The students are here because they have genuine intellectual interest, and they love having an opportunity to casually come together, share a meal, and dig deep into the big questions that every college student loves exploring: What is the meaning of life? Who should determine when life is over? What gives life meaning and purpose? These and many other deeply philosophical questions serve as the foundation for the team’s preparation.”

“This felt like the culminating experience of my ethics and pre-medicine studies,” Coury says. “Everything I have studied over the past four years came together in this competition.”  She’s certain that her experience with ethics at Dartmouth will shape her career. “I absolutely will continue my ethics studies as I become a physician, and strongly believe a background in moral philosophy is necessary when practicing medicine,” she says. Coury is writing a senior thesis on the ethics of health care corporations, and hopes that as a practicing physician she will continue to speak and consult publicly about ethical issues.

Questions the students considered this year included: Do highly intelligent animals have personhood status? Is force-feeding in Guantanamo Bay ethically wrong? Is physician-assisted suicide against the purpose of a physician? Should the potential drugs for curing Ebola have been researched in a nonrandomized fashion so as to reach the most patients, despite potential risks?

All team members have taken classes in moral philosophy or bioethics. Three—Coury, Park, and Ramanand—are premedical students and have participated in research at Dartmouth Hitchcock Medical Center and the Geisel School of Medicine.

Park praises the benefits of learning through doing that the program offers. “It’s not just about how much you researched, but how you can pitch your point,” he says. The competition built his confidence in his ability to speak in public, he says. “Because I put in the time to research and think about the cases, speaking about them wasn’t so hard. I was very nervous about it for a long time, but I had so much fun in the end.”

The team began preparing for the event over winter term, researching the 15 topics announced by Bioethics Bowl organizers and preparing speeches. “We had several meetings to practice presenting our cases, discuss the ethical issues, and gain each other’s perspectives,” says Coury. “Some of the cases, we would all agree on an ethical recommendation; others had much more debate.”

Coury invites interested students to contact any of the team members or Donovan about the team or the Ethics Institute itself. “Professor Donovan is always open to discussing these issues with students and it is very easy to get involved,” Coury says. “The Ethics Institute is a unique department that I believe everyone should take a class in during their time at Dartmouth.”