New Hampshire Gov. Maggie Hassan’s message to millennials at a Dartmouth forum this week was short and to the point: Consider a career in public service in the Granite State. 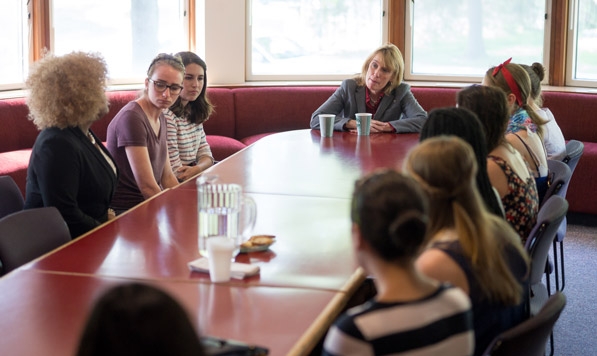 Gov. Maggie Hassan met with members of the Dartmouth College Democrats during her visit to campus on May 19. (Photo by Eli Burakian ’00)

“New Hampshire is a great place for that,” Hassan said at a public event hosted by the Nelson A. Rockefeller Center for Public Policy and the Social Sciences on Tuesday, May 19. “The state still does politics in a grass-roots way—human capital is what’s important.”

Hassan, who as the governor is a member of the Dartmouth Board of Trustees, took part in a public conversation with Charles Wheelan ’88, senior lecturer and policy fellow at the Nelson A. Rockefeller Center. Wheelan, a lecturer in economics and author of The Centrist Manifesto, observed that the fractious environment in politics today has engendered a growing cynicism among the electorate, particularly the generation in college today.

Hassan agreed that rigid ideology has created gridlock nationally, but she again pointed to New Hampshire as a place where public officials, with the exception of a few “outliers,’ are still focused on problem solving.

“We are supposed to have disagreements,” Hassan said. “Then we come together because it’s our job.” She pointed to the budget fights in her previous term. In the end, lawmakers compromised so that “everyone disliked something” in the final agreement. A whole new set of disagreements are on display with the current budget debate, but Hassan said she is confident lawmakers will find common ground in Concord.

In contrast, Hassan pointed to the inability of the U.S. House to pass a long-term transportation funding bill, which would support infrastructure work in the states. In New Hampshire, officials on both sides of the aisle as well as business leaders all want infrastructure repairs to be funded, but Congress cannot get it done, Hassan said.

The governor met with Dartmouth College Democrats before the public event, many of whom worked on her 2014 campaign. Charlotte Blatt ’18, vice president of the campus group, said that in the midterm election about 1,000 Dartmouth students voted. While it was the highest ever student turnout for a midterm election, Blatt asked Hassan for advice on inspiring even more students to vote.

It is essential to talk about how politics are relevant to students’ lives, Hassan said. With issues such as raising the minimum wage, guaranteeing access to education, and providing job opportunities for young people to stay in the state, it’s important to talk about how these changes would affect real people, she said.

Hassan said students need to see how politics affects them personally. She pointed to a May 15 decision by the New Hampshire Supreme Court that ruled unconstitutional a Republican-backed law that tied the right to vote with the requirement that voters re-register their car and obtain new driver’s licenses within 60 days of moving to the state.

This was a direct threat to the voting rights of college students, Hassan said. In fact, the lead petitioners in the case were four students from the University of New Hampshire.

Mariah Williams, MALS ’15, of the campus Democrats told Hassan she is drawn to work in public policy, but she is concerned about the lack of diversity and job opportunities for her in the state.

“As an African American female, how can I help New Hampshire if I don’t see myself here?” she asked.

The demographics of New Hampshire are changing, Hassan said. “Democracy makes progress as more people come to the table,” she said. When she was first elected in 2012, New Hampshire became the first state in the nation with an all-female congressional delegation and governorship.

“So you may be able to see yourself here,” Hassan told Williams. “You would make a great leader.’