The Dartmouth women’s tennis team defeated William & Mary by a score of 4-1 in the first round of the NCAA Division I Women’s Tennis Championships on May 9 at the Cone-Kenfield Tennis Center in Chapel Hill, N.C. 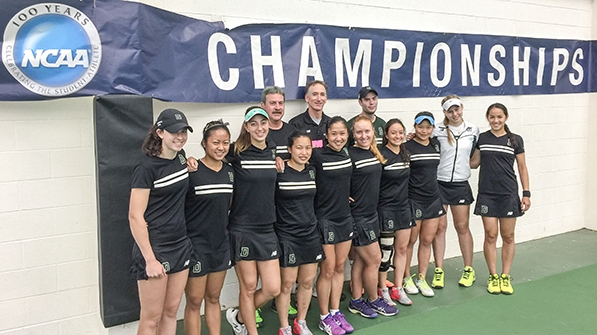 The Big Green women’s tennis team competed in the NCAA Division I Championships for the first time in program history. (Photo courtesy of Dartmouth Athletics)

With the victory, the Big Green advanced to the second round on May 10, taking on the No. 2 ranked team in the country—the University of North Carolina at Chapel Hill. Dartmouth lost to the Tar Heels by a score of 4-0, ending its season with a record of 19-6.

The season continues for Taylor Ng ’17, who will compete at the NCAA Division I Women’s Tennis Singles Championship starting on May 20, in Waco, Texas.

Softball Is Tallahassee-Bound For NCAA Regionals

For the second straight year, the Dartmouth softball team is headed to the NCAA Division I Softball Championship tournament. The tournament field of 64 teams was announced on May 10.

The Big Green will travel to Tallahassee to take on Florida State University at 7 p.m. on Friday, May 15, in the opening game of the double-elimination regional round.

Baseball Falls to Columbia in the Ivy League Championship Series

The Dartmouth baseball team lost to Columbia University in the best-of-three Ivy League Championship series this past weekend.  The Big Green won the first game of the series by a score of 7-6 before losing to the Lions in game two and three by scores of 7-2 and 10-7. Dartmouth finishes the season with a record of 21 wins and 22 losses.