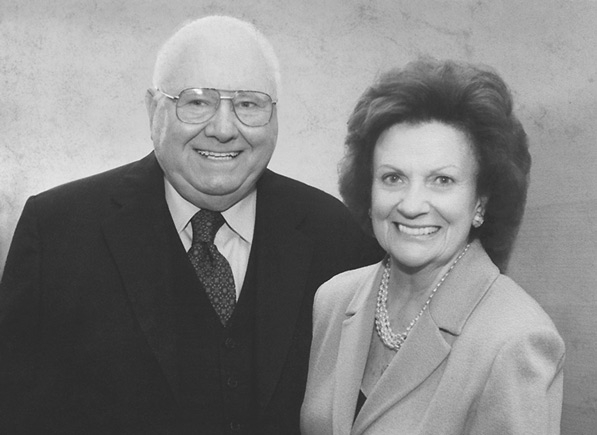 “Jack was keenly aware of the power of mathematics to solve complex problems, and he would be thrilled to know that his legacy will support generations of mathematicians to come,” says Dorothy Byrne of her husband, the late insurance executive and philanthropist John J. (Jack) Byrne Jr. (Photo courtesy of Dorothy Byrne)

“With this remarkable gift honoring Jack Byrne, a longtime and beloved benefactor of Dartmouth, the College will attract exceptional new scholars who will apply math to important societal issues,” says President Phil Hanlon ’77, himself a mathematician. “The gift’s enrichment grants will draw the very best mathematics students to Dartmouth, and will enable productive faculty-student partnerships in research and learning both inside and outside the classroom.

“All of this, in turn, will bring national attention to our innovative work in this important field, and it will help Dartmouth cultivate students who share Jack’s passion for mathematics,” President Hanlon adds.

The gift—to be matched with $5 million from a $100 million gift Dartmouth received in 2014 to support academic excellence—creates the $25 million Jack Byrne Scholars Program in Math and Society. It includes:

Dartmouth has dedicated the Jack Byrne Undergraduate Commons at the John Kemeny Mathematics Building as a formal and informal meeting place for students and faculty.

“This gift honors Jack’s love for mathematics and education, as well as his commitment to Dartmouth and its students,” says Dorothy Byrne. “Jack was keenly aware of the power of mathematics to solve complex problems, and he would be thrilled to know that his legacy will support generations of mathematicians to come.”

In all, the program will increase collaboration among the Department of Mathematics, the Tuck School of Business, the Department of Computer Science, and other departments across campus. The new faculty members will engage the Byrne Scholars—as well as other students and faculty—in high-level research addressing major global challenges. For example, faculty and students could develop mathematical models to better arm health care providers in their fight against epidemics, or financial models that could help keep Social Security on a sound footing.

“Bringing the world’s best students and top minds in applied mathematics to Dartmouth will enable us to work on a greater number of exciting projects that lead to real-world applications,” says Daniel Rockmore, the William H. Neukom 1964 Professor of Computational Science. “It will also expand our cross-disciplinary teaching with computer science and invigorate nascent collaborations with Tuck.”

This new program builds on a rich legacy at Dartmouth as well as current strength. Sixty years ago, Professor John Kemeny and his colleagues had an enormous impact in the fields of mathematics and computer science—including creation of the BASIC programming language—and brought international recognition to Dartmouth’s Department of Mathematics. Dartmouth remains competitive in attracting top math students.

With strong ties to the College and the region, the Byrne family has supported numerous Dartmouth-related programs and projects, including the Byrne Fund in Chinese Studies, the Norris Cotton Cancer Center, the Palliative Care Program at DHMC, grants for student public service projects at the William Jewett Tucker Foundation, and construction of Byrne Hall at Tuck and Byrne II, a residence hall in the McLaughlin Cluster. The Byrnes’ three sons, all Dartmouth alumni, established a professorship at Tuck in honor of their father, who served on the Tuck Board of Overseers from 1982 to 2000.

An insurance industry pioneer, Jack Byrne studied at Rutgers University and the University of Michigan, where he received a master’s degree in mathematics. He began his business career as an actuary at Lincoln National Life and later served as executive vice president of Traveler’s. He became chief executive of GEICO in 1976, rescuing the company from bankruptcy and leading one of the most famous comebacks in insurance history.

Warren Buffet, chair of Berkshire Hathaway Inc., one of GEICO’s biggest investors at the time, has described Jack Byrne as the “Babe Ruth of insurance.” Byrne was inducted into the Insurance Hall of Fame in 2009.

Dartmouth has recently named its first Byrne Scholars, including two current first-year students and eight students who will matriculate this fall. They are:

Why are we so intrigued by the infinite?