Sixteen Dartmouth students and alumni have been awarded National Science Foundation (NSF) Graduate Research Fellowships (GRF) for 2015 and another 16 received honorable mentions. The Dartmouth winners announced on March 30 were among the 2,000 selected from 16,500 applicants nationwide. 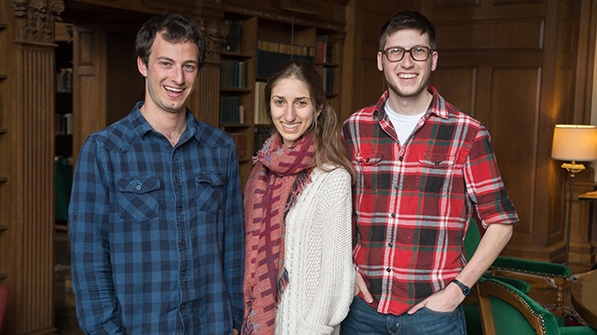 (from left) Gabe Lewis, Sarah Hammer, and Andrew Sanders were on campus when they received the news from the National Science Foundation. (Photo by Eli Burakian ’00)

“We applaud the students who won and those who received honorable mention,” says F. Jon Kull ’88, dean of graduate studies. “These fellowships recognize the hard work of these students and the potential of the research they pursue. The Graduate Studies Office is proud of the accomplishments and appreciative of the accolades they bring to Dartmouth and its faculty.”

The fellowships provide students financial support for three years, including a $34,000 annual stipend and a yearly $12,000 cost-of-education allowance to the graduate institution.

Three of the Dartmouth GRF winners were on campus March 30 to receive notice of their awards.

Sarah Hammer ’15, from Villanova, Pa., is enrolled at both Dartmouth and Thayer School of Engineering. She was surprised and delighted about winning the NSF fellowship. “I had actually approached it only as a ‘test run’ for next year,” she says.

Hammer is working toward an AB in engineering, modified with chemistry, and a minor in environmental studies, as well as a BE in chemical engineering from Thayer. “I will be graduating with both degrees (AB/BE) in June,” says Hammer. Her academic and research adviser at Thayer is Professor Lee Lynd, with whom she has researched biofuels derived from plant cellulose.

“At the end of August I will be heading for Princeton to pursue my interest in biofuels in the school’s Department of Chemical and Biological Engineering. I plan to spend most of my summer at home with family and friends, and in my spare time I’ll be reading scientific literature pertaining to my field,” she says.

Gabriel (Gabe) Lewis is originally from Arcata, Calif., where he took math classes at Humboldt State University while still in high school.

“I ran out of courses to take at the high school and I wanted to push myself a bit further,” says Lewis. “I then got into Williams and took a bunch of math and became a physics and geology double major.”

The opportunity to work outdoors on geological problems attracted him to that field. “You see the final result in the rocks and you have to work backwards to figure out what happened and explain the processes that led to it,” says Lewis. But it was Assistant Professor of Earth Sciences Erich Osterberg who drew him to Dartmouth for graduate school. Lewis describes Osterberg as “young, passionate, brilliant, really dedicated, and devoted to his students.”

“This is a great place to be and I am really fortunate to be chosen for this NSF award,” says Lewis, who began at Dartmouth in September 2014. “I feel incredibly lucky to have had the support and the guidance from the professors, both Erich and Frank Magilligan, in helping me write the proposal.”

Andrew Sanders from Locust Grove, Okla. entered Dartmouth as a graduate student in July 2014, having completed his bachelor’s degree at the University of Arkansas.

“The GRF is highly renowned and I am definitely pleased,” says Sanders.

While looking at graduate programs, he encountered Assistant Professor of Biological Sciences Brad Taylor. “He had some research going on here that really dovetailed with my interests. We started discussing ideas. It was really exciting and we had good chemistry,” Sanders says.

Taylor is working with the freshwater algae “didymo” and the whirling disease in trout. Sanders says he is working to delineate the relationship between the two.

“The disease causes skeletal deformation so they wind up with this s-shape that makes them swim in circles,” says Sanders. “A worm is the primary host for the pathogen and didymo is a really great habitat for the worms. I am looking at whether the didymo blooms are making the disease problem worse.”

He is working on the problem in Colorado, where the trout industry brings in more than $325 million annually.