Scholars in the humanities don’t take quizzes and exams to assess themselves, but they do share and critique each other’s work, says Professor of English Thomas Luxon. That’s why students in his Shakespeare course not only study the poet’s plays and other writings—they also develop a paper suitable for presentation at a professional academic conference. 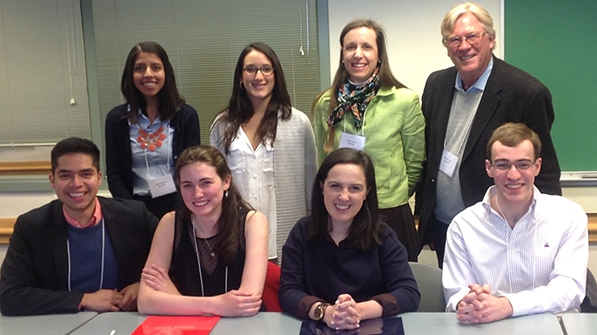 “Students respond to authentic assignments,” says Luxon, who served as the inaugural director of the Dartmouth Center for the Advancement of Learning (DCAL) until this year. “I design my courses to invite students to be apprentices to the discipline of literary research and scholarship.”

In April, seven students who completed Luxon’s “English 15: Shakespeare I” class over the summer presented their final papers at the Medieval and Renaissance Forum at Keene State College in Keene, N.H. The students are David Cordero ’16, Alex Ganninger ’16, Lacey Jones ’16, Cecilia Robinson ’16, Lauren Russell ’16, Melissa Vasquez ’16, and MALS student Jennifer Cormack. (An eighth student, Niranjan Ramanand ’17, also had his paper accepted to the forum, but was unable to attend.) Funding for the students to attend the conference came from the Lucas Family Fund for Undergraduate Research and from the Department of English.

Luxon, who has brought undergraduates to this particular conference for several years, says this was the largest group to date to have papers accepted. The conference brought together 30 panels of scholars—from undergraduates to full professors—representing more than a dozen colleges and universities around the country.

Luxon calls his pedagogical model “research-informed teaching.” He used English 15 as an example in a paper he presented on the subject at the Matariki Humanities Colloquium in New Zealand in December.

In that paper, he concluded that students who completed the class “already are successful scholars in my discipline because they learned as apprentices to that discipline, by completing an authentic project in much the same way any professional does.”

The impact of that authenticity shows up in students’ sense of ownership of their work. Cordero, who presented at the conference on how The Rape of Lucrece has informed the literature of colonialism, says, “I’m proud of this. It’s something that I’ve worked for, and I want to share it with people who have a similar interest.”

Jones, whose paper discussed madness in Twelfth Night, says, “I’m thinking of pursuing a career in academia, so I couldn’t have asked for a better experience as preparation for that.” Participating in the conference “gave me the confidence of knowing that I’m capable of doing it,” she says.

Students were not required to submit their papers to the conference, though Luxon encouraged nearly 20 to do so. But every student worked toward the goal of producing a paper that could contribute to a scholarly conversation beyond the classroom.

From the beginning of the term, students identified the topic of their final papers and worked with Luxon and librarian Laura Braunstein to “find out where the professional conversation is and how to evaluate it,” Luxon says.

Because they committed to their project early, he says, they could build a rich argument for their culminating project through a variety of assignments aimed at cumulatively scaffolding their skills. Throughout, Luxon adapted class activities to address interests and questions students posed themselves in advance. Students were also expected to review each other’s work and receive peer feedback.

“He structured the class around exactly what we wanted to get out of discussion,” says Russell. “He let us do a lot of the work—he wasn’t interested in standing up there and teaching without our involvement.”

Jones appreciated the ability to focus on a single subject throughout the term. “When you’re working on the same thing for an extended period of time, you really get to be in that paper and in that way of thinking,” she says.

Russell wrote about the expression of gender in Twelfth Night. “In a lot of English classes you explore close reading of the main texts and develop your own thoughts and ideas about them, but this was more of a research paper. I had never really incorporated other people’s articles into my own English papers,” she says.

For Russell, the best part of presenting at the Keene State conference was the question-and-answer session that followed. “Listening to people actually accept your work and engage in it and ask you questions as if you are now an expert—that was a great feeling,” she says.