Student-Athletes Honored at Celebration of Excellence

The Department of Athletics and Recreation hosted its annual Celebration of Athletic Excellence on May 18, honoring teams and individual student-athletes for their achievements in 2014-2015. 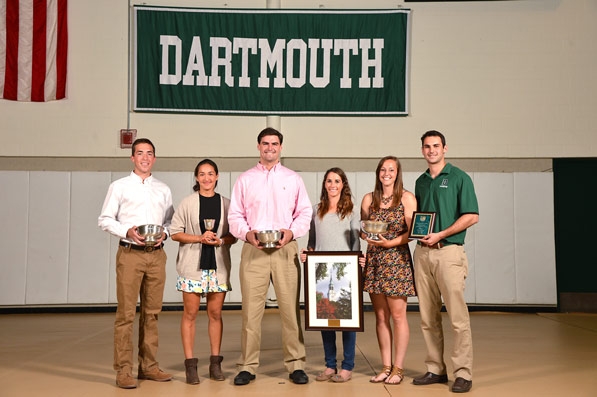 Dartmouth’s highest athletic honor, the Kenneth Archibald Prize, was awarded to Kristen Rumley ’15 of the Big Green softball team. The award is presented annually to “the member of the graduating class who has been four years in attendance, who has been the best all-around athlete, regard also being had to moral worth and high standing in scholarship.” Rumley was a three-time All-Ivy League Pitcher of the Year and All-Ivy League First-Team selection. She helped guide the Big Green to league championships in both 2014 and 2015.

Taylor Ng ’17 of the women’s tennis team was awarded the Class of 1976 Award, presented annually to the most outstanding female athlete of the year. Ng was named the Ivy League Player of the Year, was a first-team all-conference player in both singles and doubles, and became the first woman in Dartmouth history to earn a qualifying berth in the NCAA singles tournament.

Patrick Caldwell ’17 of the men’s ski team was awarded the Alfred E. Watson Trophy, presented each year to the most outstanding male athlete of the year. Caldwell was the 2015 NCAA champion in the men’s 10K freestyle and the Men’s Nordic Skier of the Year.

The Class of 1948 Scholar-Athlete Awards, given to “one male and one female of the junior class, who have combined outstanding performance in athletics and significant achievement in academics,” were presented to women’s soccer player Jackie Friedman ’16 and men’s tennis player Dovydas Šakinis ’16.

Adam Fishman ’15 of the men’s lacrosse team was the winner of the Class of 1950 Award as “the varsity student-athlete who has demonstrated the most extraordinary commitment to community service.”

Will Guinee ’15 of the football team was the winner of the Timothy Wright Ellis 1955 Memorial Award, is given to a male student-athlete showing extracurricular and scholastic drive, spirit, loyalty, and amiability, as voted on by the captains of the men’s teams.

Rebecca Hu ’15 of the field hockey team was honored as the recipient of the Agnes Kurtz Award, given to “that woman who best combines proficiency in athletics with dedication to the furthering of women’s sports” as nominated and voted on by the captains of the women’s teams.