Walter Cunningham Jr., director of the Dartmouth College Gospel Choir, is the subject of a film biography made by the students of Jeffrey Ruoff, associate professor of film and media studies, in “Film 39, Group Documentary.” The film, Introducing ... Walt Cunningham!, tells Cunningham’s story from his Iowa childhood to study at the U.S. Military Academy at West Point, through a career in corporates sales, and then to Dartmouth. A discussion with Cunningham and the student filmmakers follows both screenings, which begin at 6:30 p.m. and 8:30 p.m. on Friday, May 29. 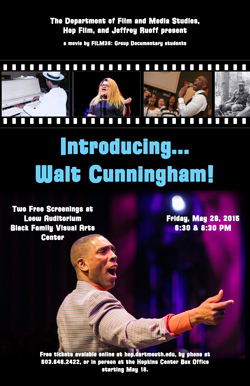 Thursday, May 28: The annual Karen E. Wetterhahn Science Symposium, named in honor of the late Karen E. Wetterhahn, a professor of chemistry and co-founder of the Women In Science Project (WISP) at Dartmouth, opens with a keynote address by Kathleen White at 4:30 p.m. in Oopik Auditorium in the Class of 1978 Life Sciences Center. White, who leads national initiatives for the U.S. Army Corps of Engineers, will speak on “From Drought to Flood: Engineering for Climate Change.” White’s speech will be followed by the annual poster session from 5:30 p.m. to 7 p.m., featuring scientific research by Dartmouth undergraduates.

Thursday, May 28: The DALI lab and DEN present The Pitch, where 20 teams will compete for funding and venture support from DEN (Dartmouth Entrepreneurial Network) and design and development help from the DALI lab. Audience votes will help select the winners. The Pitch starts at 7 p.m. in Loew Auditorium at the Black Family Visual Arts Center.

Friday, May 29: Michael Gazzaniga, professor of psychology and director of the SAGE Center for the Study of the Mind at the University of California, Santa Barbara, presents the Inaugural Wolford Lecture at a Department of Psychological and Brain Sciences colloquium. Gazzaniga’s talk, “Split-Brain Research: A Journey from Dartmouth to Caltech to Dartmouth,” begins at 4 p.m. in Filene Auditorium, Moore Hall.

Friday, May 29: Sessions of a two-day workshop on issues at the intersection of ethics and practical reason begin Friday at 2 p.m. in the Paganucci Lounge, Class of 1953 Commons, and continue Saturday, May 30, at 10 a.m., in the Class of 1930 Room at the Rockefeller Center.

Saturday, May 30: Dartmouth’s Department of Religion marks the retirement of two of its faculty members—Nancy Frankenberry, the John Phillips Professor of Religion, and Ronald M. Green, Professor for the Study of Ethics and Human Values—with a symposium in their honor. “Philosophy of Religion and Ethics at Dartmouth: Thinking with Nancy K. Frankenberry and Ronald M. Green” starts at 9 a.m. in Haldeman 41 at the Kreindler Conference Hall.

Sunday, May 31: The Dartmouth Symphony Orchestra presents Mahler’s Symphony No. 6 at 2 p.m. in the Hopkins Center’s Spaulding Auditorium.

Monday, June 1: Harvard’s Matthew Blackwell and Maya Sen speak on “Southern Slavery and Its Political Legacy: How America’s Peculiar Institution Continues to Affect American Politics Today,” at 4:30 p.m. in Room 003 at the Rockefeller Center.  The event is sponsored by the Rockefeller Center and Dartmouth’s quantitative social science program.

Tuesday, June 2: Actor Sharon Washington ’81 is the guest of honor at this year’s Arts at Dartmouth award ceremony.  The celebration of student achievement in the arts takes place at 4:30 p.m. in the Hopkins Center’s Moore Theater.