For the 43rd year in a row, the Dartmouth Pow-Wow shines a light on Native American culture, inviting members of the College community and neighbors in the Upper Valley and beyond to observe, participate, and learn from a broad representation of Native American dances, music, and arts and crafts. Dance competitions, drumming and other music, and a range of vendors will be on the Green from noon to 6:30 p.m. both Saturday, May 9, and Sunday, May 10. Rain site for both days is the College’s Leede Arena. 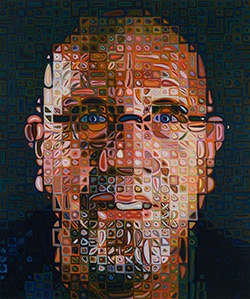 Thursday, May 7: Noted contemporary artists Martín Gutierrez, Wendy Red Star, and Renée Stout, whose work is included in the Hood Museum of Art’s current exhibition About Face: Self-Portraiture in Contemporary Art, take part in a panel discussion at the Hood titled “Self-Portraiture and the Construction of Identity.” The panel starts at 4:30 p.m. and will be followed by a reception in the Kim Gallery.

Thursday, May 7: Product development is the topic for today’s session of “Six to Start,” a series of workshops on start-ups offered by DEN, the Dartmouth Entrepreneurial Network. Sessions continue through Thursday, May 21, at 4:30 p.m. in DEN’s space at 4 Currier Place.

Thursday, May 7: Lectures and seminars set for today include the classics department’s annual Benefactor’s Lecture, “A Maiden’s Consent: Romance and Sexual Ethics at the Dawn of Christianity”; “U.S. Department of the Interior’s Top Lawyer Shares a Day in the Life,” with Hilary C. Tompkins ’90; “Future Directions in Quantum Nanoscience: Physics, Materials, Devices, and Applications”; and the panel “A Different Kind of Patriotism: Women and Anti-War Activism in the U.S. and Beyond,” featuring Louis Wheatly ’14,  whose Dartmouth thesis won the Chase Peace Prize.

Friday, May 8: Today’s events for the Illustration, Comics, and Animation conference include a discussion on art and comics featuring James Sturm, the co-founder of the Center for Cartoon Studies in White River Junction, Vt.; Harvard’s Nhora Lucia Serrano; and Associate Professor of Studio Art Enrico Riley. The Center for Cartoon Studies book festival opens the conference, which runs from 4 to 7 p.m. in Haldeman 31. Conference sessions continue Saturday, May 9.

Friday, May 8: The Department of Philosophy presents the 41st annual Francis W. Gramlich Memorial Lecture, at 3:30 p.m. in the Hood Auditorium, followed by a reception in the Kim Gallery. Mohan Matthen of the University of Toronto speaks on “Pleasure and Art.” Additional lectures and seminars today include a Jones Seminar at the Thayer School of Engineering, with Dartmouth’s Lorenzo Torresani, and the University of Pennsylvania’s Lee Bassett presenting on “Harnessing Solid-State Impurities for Quantum Science and Technology,” at a physics and astronomy colloquium.

Friday, May 8: The computer science department welcomes all to its 2015 research symposium, featuring talks and posters highlighting work underway at Dartmouth in all areas of the field. Keynote speaker for the event is Duke University’s Bruce Donald. The symposium runs from 3 to 9 p.m. in Kemeny Hall, Room 008.

Friday, May 8: Student-run theater group the Dartmouth Rude Mechanicals presents an outdoor production of Shakespeare’s A Midsummer Night’s Dream, with shows in Fahey Courtyard today and Saturday, May 9, at 4 p.m., and Sunday, May 10, at 2 p.m. The rain site for the shows is Silsby 28. And student-produced performances of the Stephen Sondheim musical Merrily We Roll Along run Friday, Saturday (8 p.m. both days), and Sunday (at 2 p.m.), in the Hopkins Center’s Moore Theater.

Saturday, May 9: The Tuck Armed Forces Alumni Association and Project VetCare partner to host the Upper Valley Serves 5k and 10k races, with a 9 a.m. start time in front of Tuck Hall. The 2015 Special Olympics Summer Games for the Upper Valley region take place today at Alumni Gym and Hanover High School, from 9:30 a.m. to 2 p.m.

Saturday, May 9: The Department of Mathematics invites middle and high school female students and their teachers, both women and men, to Sonia Kovalevsky Math Day. Engaging and entertaining hands-on workshops and talks run from 9:30 a.m. to 3:30 p.m. in Kemeny Hall, Room 008.

Sunday, May 10: For spring term 2015, student preachers from the Class of 2015 at the Tucker Foundation-sponsored Sunday night chapel service take on the theme “Dear Dartmouth,” writing a letter to the College reflecting on the last four years. Services take place at 5 p.m. in Rollins Chapel, every Sunday.

Monday, May 11: Lectures today include Nieman Fellow Henry Chu of the Los Angeles Times speaks on “Europe in Crisis,” and Elisa Massimino, president and chief executive officer of Human Rights First, asks, “Is the Age of Human Rights Over?”

Monday, May 11: This Monday and every Monday in spring term, learn and practice the Argentine Tango at classes and practica sessions at 7:30 p.m. in the Sarner Underground in the Collis Center.

Wednesday, May 13: Leslie Center visiting scholar Saskya Jain reads from her work at 4:30 p.m. in Room 003 at the Rockefeller Center. Jain’s short stories and essays have appeared in numerous journals and magazines, most recently in The Economist and The Caravan; her novel Fire Under Ash was published with Random House in 2014.

Wednesday, May 13: The Hood Museum of Art offers “Learning to Look at European Art,” at 6:30 p.m. This discussion-based, participatory workshop explores the highlights of the Hood’s European collection and offers techniques for art appreciation generally. The museum requests that participants register by May 11.