Republicans Scott Walker and Jeb Bush would each lead Democrat Hillary Clinton in presidential match-ups if the election were held today, according to Dartmouth's eighth annual New Hampshire State of the State Poll.

According to the survey of registered New Hampshire voters, conducted by undergraduates with the Nelson A. Rockefeller Center for Public Policy and the Social Sciences, Wisconsin governor Walker enjoys the strongest support against Clinton—38.7 percent to 34.8 percent—as well at the highest approval rate among the state's independent voters at 40.5 percent versus 26.5 percent for Clinton.

A prospective contest between Bush and Clinton was closer, with the former Florida governor polling at 36.9 percent to Clinton's 34.14, with 34.3 percent of independents favoring Bush. However Bush made up a lot of ground compared with last year's NH State of the State Poll, in which he trailed Clinton by 21 points.

In nearly all the hypothetical match-ups, the percentage of undecided voters was consistently near 30 percent.

"If the Democratic primary field remains comparatively uncompetitive, Clinton will glide to a primary victory in New Hampshire as her core Democratic voter base is about as solid as one could hope for more than nine months from the New Hampshire primary," says Ronald Shaiko, survey director of the 2015 NH State of the State Poll and senior fellow and the associate director of the Nelson A. Rockefeller Center. "Her electoral success in November of 2016 in New Hampshire, however, is far from certain."

The trends among independent voters in the poll could spell trouble for the Clinton campaign, Shaiko says. "Hillary Clinton has work to do in New Hampshire."

The annual poll is run by the Rockefeller Center's Class of 1964 Policy Research Shop. The telephone polling data is gathered by Dartmouth students in Professor of Government Deborah Brooks' “Polling, Public Opinion, and Public Policy” class as well as by Policy Research Shop students. 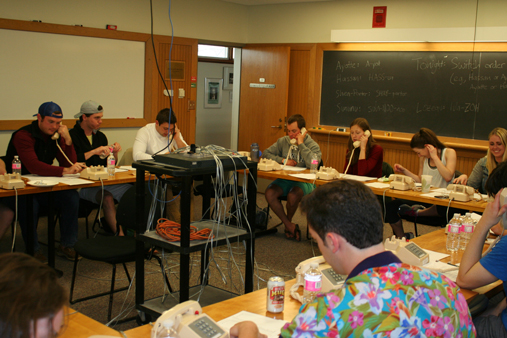 Andrew Samwick, the Sandra L. and Arthur L. Irving ’72a, P ’10 Professor of Economics and director of the Rockefeller Center, says the polling work provides invaluable experience for Dartmouth students.

"Beyond the service that the State of the State poll provides to the state of New Hampshire, we use the poll as a way to teach students how to collect original data on public opinion," Samwick says. "To their credit, they work diligently and professionally in their interactions with New Hampshire citizens, and they emerge from the experience with a newfound appreciation for political issues in the Granite State."

On other topics, the poll found: