Morgan Curtis ’14 says the idea of biking to COP21, the United Nations Climate Change Conference that takes place in Paris this November came to her as she sat by a woodstove this past winter. 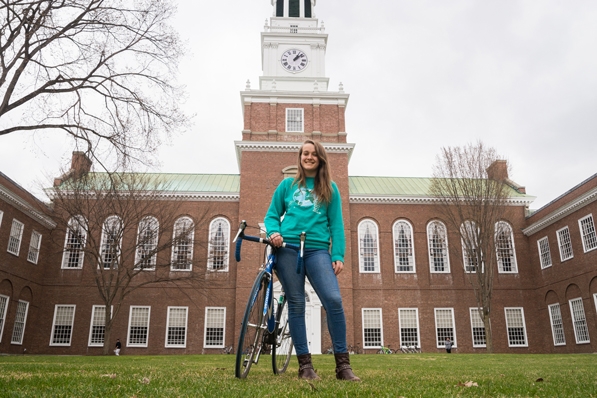 Morgan Curtis ’14, a delegate to COP21, the United Nations Climate Change Conference, is setting off on a 10,000 km bike ride to the event, which begins in November in Paris. Along her “Climate Journey,” Curtis plans to gather stories of individuals and communities mobilizing for action on climate change. (Photo by Eli Burakian ’00)

After graduating from Dartmouth, Curtis was teaching at the Chewonki Semester School in Maine, which offers experiential environmental education to high school juniors. She was committed to grassroots climate advocacy and to the power of story telling, and wondered how she could combine her passions and call attention to what she saw as a critical moment: the opportunity for nations to reach an agreement on a treaty to address climate change.

“Climate Journey,” as she calls her upcoming trip, grew from that vision: She would attend the conference, travel to it slowly, and along the way gather stories about individuals and communities mobilizing for action on climate change.

Soon after announcing her plans, Curtis was named a youth delegate to the conference, representing SustainUS (US Youth for Sustainable Development).

“I will be inside the conference in an official capacity, advocating on behalf of youth and future generations for the strongest possible binding outcome,” she says. “I think this adds great weight to my journey, as I’ll be able to bring the stories and lessons from the trip into the conference space.”

Curtis says she is astounded by the generosity that her quest has met so far, including personal connections, support, and guidance as well as financial support and gifts in kind—including her touring bike. Curtis will be joined in her trek by teammate Garrett Blad, a 2015 University of Notre Dame graduate. Blad, an artist and activist, will be documenting the journey visually. Both Curtis and Blad are seeking further support through crowdfunding.

Their journey, which starts June 22, will take them through Vermont, Maine, New Brunswick, Nova Scotia, Newfoundland, Iceland, Norway, Sweden, Finland, Denmark, Belgium, the UK, and France. “Most of the miles will be human powered,” Curtis says. She’ll be traveling by bicycle and shifting to ships or planes to cross the ocean. “We anticipate cycling around 10,000 km over the five months.”

Asked to trace a line from the project back to a Dartmouth experience, Curtis doesn’t hesitate: the Big Green Bus. She was a crewmember on the bus in the summer of 2011, an experience that convinced her of the need to “communicate and connect, even if it takes doing something a little silly, to convey the urgency around climate and sustainability.”

For Curtis, a U.S. citizen raised in London by American parents, the 2011 trip offered a chance to see her homeland in person.  Climate Journey will widen her horizons even further.

Her belief in the transformative power of narrative also traces back to her experience at Dartmouth, where she studied with faculty member Pati Hernandez and took part in Hernandez’ “Telling Stories for Social Change” class as both a student and a teaching assistant. Dartmouth also introduced Curtis to writer and environmentalist Terry Tempest Williams, a former Montgomery Fellow and provostial fellow who remains an inspiration and mentor to Curtis.

Curtis says it’s not, in the end, about the stamps in her passport or even the bike-miles to log. The point—besides arriving in Paris in time for the opening of the climate conference—is connecting with people along the way.

Traveling by bike will keep her and Blad close to the people and communities whose stories they want to hear, learn from, and share.

“It’s not so much about the biking as the stories,” she says.

Curtis will be reporting on the trip and the conference at the website Climate Journey.