DAVID BROOKS, as an author, reporter, columnist and commentator, you have distinguished yourself among our foremost public intellectuals through the crafting of an unmistakable voice—one of wit and wisdom, always thoughtful, ever engaging. 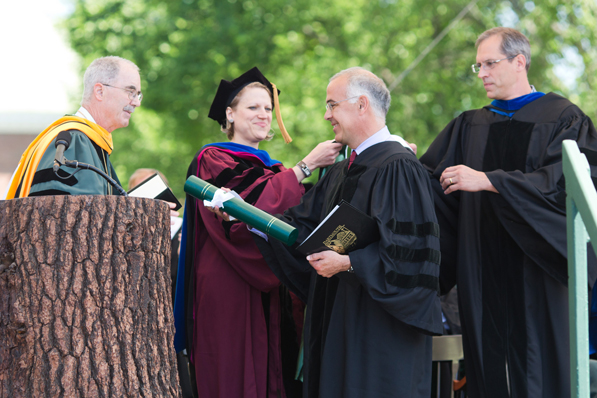 David Brooks received an honorary degree from Dartmouth at its 2015 Commencement Ceremony. (Photo by Rob Strong ’04)

In a time when thought can be communicated at the instant of its inception, often conveying more heat than light, yours is a most uncommon ability to broach contentious subjects with care, to offer insight without insult, to be provocative without being pointed. This disarming talent was evident even when you were a student at the University of Chicago. Your parody of William F. Buckley Jr. was marked by such cleverness that Buckley parried not with one of his famous retorts, but with a job offer at the National Review.

As an author of widely diverse interests, you exemplify the intellectual curiosity at the heart of the liberal arts. You have explored subjects as expansive as class dynamics and as esoteric as the chemistry that fuels our ambitions, managing to weave them into accessible narrative. A lifelong student of history and politics, you’ve written commentary that has enriched the pages of our most respected publications, including The Washington Times, The Wall Street Journal, Newsweek, The New Yorker, Atlantic Monthly and The New York Times, cementing your reputation as one of our most influential thinkers.

But it has been said that perhaps you are at your best as a social observer, documenting the changing patterns of contemporary life. Indeed, with your first book, Bobos in Paradise: The New Upper Class and How They Got There, you introduced us to your self-styled brand of “comic sociology” in a work that has become a modern classic.

For your abiding commitment to the integrity of your craft, and for practicing it with consummate skill, eloquence and abundant good humor, Dartmouth delights in awarding you the honorary degree of Doctor of Letters.