Shoshana Silverstein ’15 asked David Brooks what single bit of advice he would give a group of graduating seniors who met with Dartmouth’s Commencement speaker over lunch Saturday.

“Find your moral philosophy,” said Brooks, a New York Times columnist and author of several books, including, most recently, The Road to Character, which grew out of a class he teaches at Yale titled “Humility.” 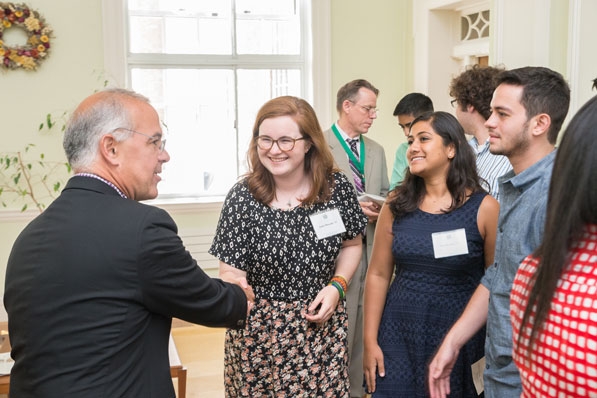 Students got a chance to talk to New York Times columnist David Brooks when he met with them over lunch the day before Commencement. (Photo by Eli Burakian ’00)

The columnist said he senses a deep desire for meaning in his Yale students and in his young Times colleagues. As a group, they are motivated to succeed and enthusiastic about their work, but they have grown up in a society that celebrates their personal success without offering a moral foundation.

Chase Mertz ’15, senior class president and, like Silverstein, a member of the Palaeopitus Senior society, asked Brooks what he thought about the College’s effort to establish a code of conduct pledge as part of the Moving Dartmouth Forward initiative.

There was a time when schools viewed character building as their core mission, said Brooks. When Frances Perkins, President Franklin D. Roosevelt’s labor secretary and the first woman to hold a cabinet-level position, went to Mount Holyoke College, the guiding mission was to “go where no one wants to go; do what no one wants to do.”

Since then, “institutions have opted out,” Brooks told the students. But he said he senses a renewal of the need to find a moral grounding. And colleges and other institutions seem to be searching for a way to do this.

“I believe that conversation is waiting to happen,” Brooks said, not just at Dartmouth, but across the country. 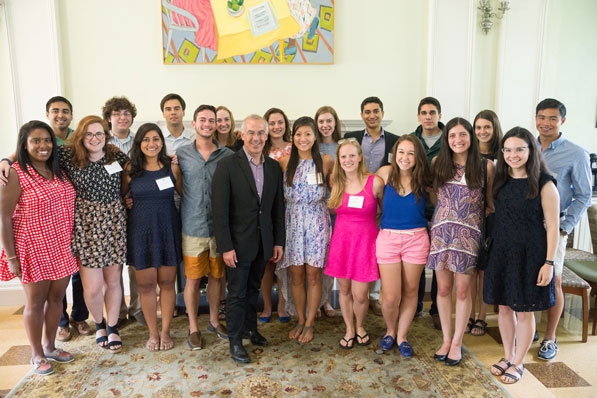 The group of students from this year’s graduating class who met with author David Brooks over lunch included a number of aspiring journalists. (Photo by Eli Burakian ’00)

Life after college can be a shock to many, he said. “After 22 years of structure—you are the most supervised generation in history—suddenly you will be released into the wild.

“Nurture friendships, don’t judge yourself against your friends’ Facebook highlight reels,” and pick a moral hero to emulate, Brooks says.

“And I don’t endorse marrying early,” Brooks said, advising the students that marriage is not to be taken lightly. Think about what it means and consider the question carefully and seriously, he said.

Take the opportunity disappointment presents, he said, and “widen your horizon of risk.” The columnist told the aspiring journalists to “develop something singularly distinct, and as the diplomat Richard Holbrooke put it, ‘know something about something.’ ”

“If you’re going to write, make it interesting,” Brooks said. “For the last four years, men and women were paid to read your writing. That will never happen again.”