Friendship Formed at Dartmouth Leads to Grammy for Alumnus

For Kabir Sehgal ’05, a connection made at Dartmouth didn’t just lead to a job—it led to a Grammy.

Sehgal was honored earlier this year for his work as executive and artistic producer on Arturo O’Farrill and the Afro Latin Jazz Orchestra’s album The Offense of the Drum, which won the award for Best Latin Jazz Album. Sehgal, an accomplished musician, was a member of Dartmouth’s Barbary Coast Jazz Ensemble and as a student toured with Wynton Marsalis. It was during those undergraduate years that he first met O’Farrill, who performed with the ensemble four times. 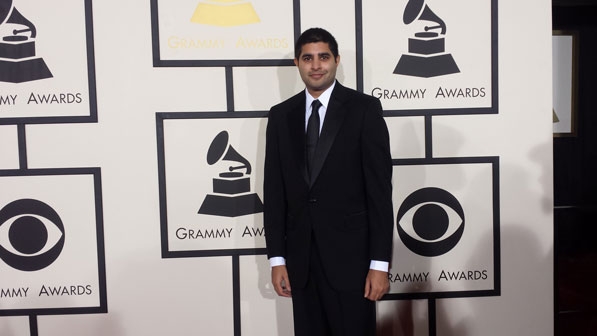 “The Grammy was the icing on the cake, but what really matters was that we created an album of what I think is really important music,” says Kabir Sehgal ’05. (Photo courtesy of Kabir Sehgal ’05.)

Don Glasgo, director of the Barbary Coast Jazz Ensemble, calls Sehgal “one of the most remarkable, well connected, and brightest students I’ve ever had,” and “a master at networking.”

O’Farrill remembers that while he was teaching a master class at Dartmouth in 2005, Sehgal asked him to lunch and described a book he was writing.

That lunch meeting at Dartmouth more than a decade ago was the beginning of what Sehgal calls “a life-long friendship.”

After college, Sehgal went to work in investment banking for JP Morgan, but never forgot that his true passion lay in music. “I’ve tried to help artists in the ways that I know best, both financial and artistic,” he explains.

He stayed in touch with O’Farrill, and years later the two decided to collaborate on what Sehgal calls “forward-looking Latin music that would really expand the definition of the genre.” The Offense of the Drum, which O’Farrill and Sehgal worked on for two years, features sounds ranging from reggaeton to rap, hip hop, and turntables. O’Farrill described the album as “based on pan-American rhythms, but not your grandfather’s Latin jazz.”