After Leandra Pilar Barrett ’15 finished high school in Alice, Texas, she came to Dartmouth unsure of her long-term goals but knowing the College had many strong academic programs and focused on undergraduates.

Her major—Latin American, Latino & Caribbean Studies—is interdisciplinary, but Barrett is most interested in border studies, race, ethnicity, and the prison system. 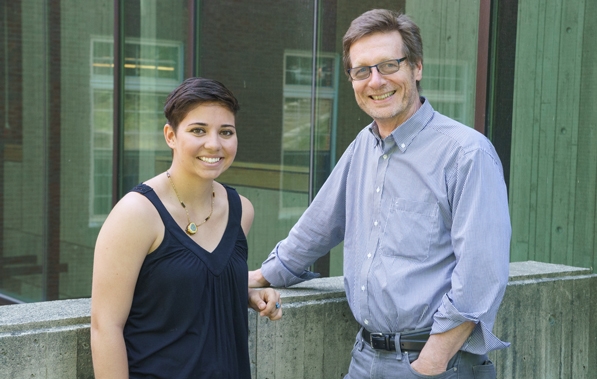 Leandra Pilar Barrett ’15, with her adviser, Richard Wright, a professor of geography and the Orvil Dryfoos Professor of Public Affairs. (Photo by Eli Burakian ’00)

“Undergraduate research is so important because it provides the opportunity for learning beyond the limits of the school calendar and curriculum,” says Barrett, a Mellon Mays Undergraduate Fellow. “I think research is also a way of leveraging the resources available to colleges and universities in a way that gives back to our community.”

Barrett did fieldwork in her home region of south Texas, studying immigrant detention from the perspective of formerly detained asylum seekers. She conducted three months of fieldwork at a homeless shelter for asylum seekers and other noncitizens. She lived and worked there during the height of the humanitarian crisis in June and July 2014, and again in December 2014.

“In the thesis I compare the legal and social resources available to detainees versus non-detained asylum seeking individuals and families from East Africa, Central America, and Cuba,” she says. “I also outline new migration patterns for Cuban and East African migrants traveling through south Texas and introduce a new framework for understanding the violence built into immigration law and immigrant detention.”

Barrett says her adviser, Professor Richard Wright, helped her throughout her work on her research project. “It’s been a pleasure working with Leandra on her thesis this last year, helping it grow and mature,” says Wright, a professor of geography and the Orvil Dryfoos Professor of Public Affairs.

“We met on a regular basis, hashing out ideas and research strategies. We’d consider important questions. What’s the best way to write up ethnographic research? Which literatures does this scholarship advance? Just exactly how does the asylum process work in the U.S.?  All these questions helped deepen and enrich Leandra’s research, but they also challenged me. I have a far deeper understanding of the complexity of the asylum process now than before this thesis research began.”

After graduation, Barrett plans to refine a chapter of her thesis for publication and apply to anthropology and geography PhD programs. “In the long run I hope to become a professor,” she says.