The Moving Dartmouth Forward initiative has passed a number of milestones, including selection of a safety phone app tailored for the College, the drafting of a code of conduct pledge, a social event and alcohol management plan, and a framework for student organization standards and review.

The Moving Dartmouth Forward effort will now shift from proposal development through the working groups, to implementation, which will include community conversations and detailing logistics on how each component will work. Working out the details of implementation will occur through the summer and into the fall term, says Elizabeth Agosto, associate dean of the College.

“The students, faculty, and staff on the working groups have done a tremendous job of translating the vision President Hanlon laid out in January into specific, workable policy proposals,” says Provost Carolyn Dever. “This remarkable team effort illustrates just how committed and passionate we are as a community to effect positive change.” 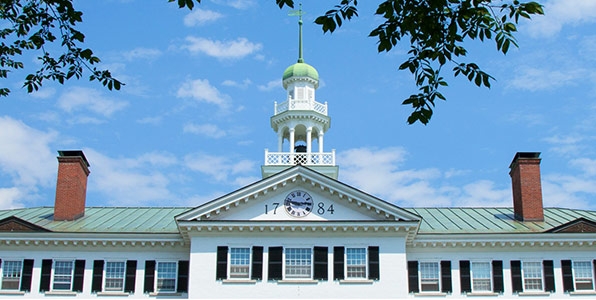 In the fall, a LiveSafe security app tailored specifically for Dartmouth students, faculty, and staff will be available as a free download for smartphones, says Harry Kinne, director of Safety and Security.

The goal is for any member of the Dartmouth community to easily share information with friends and safety officials about sexual assault, mental health issues, violence, or any safety concerns, thereby preventing incidents before they occur, says Kinne, who led the committee that reviewed existing applications.

“Our charge was to identify a Dartmouth-specific safety smartphone app for students to easily and immediately seek assistance if they ever feel threatened,” Kinne says.

“We see it as part of our Bystander Initiative because it allows for anonymous reporting and will be very accessible to students in particular, who are very used to texting as a way of communication,” he says. “It offers another way for people to intervene.”

In addition, users can send photos or videos to Safety and Security or can call 911 directly with the touch of a button. The app can also be GPS enabled.

“We would not be able to see people at all times, nor would we want to, but during an emergency, or if someone were going for a run alone for example, they could activate the GPS. It would only be transmitted if they hit that emergency button and we would be able to pinpoint their location,” Kinne says.

In narrowing the vendors down from a list of more than a dozen, the committee found that a number of colleges, including Georgetown, Arizona State, and Virginia Tech, are “very happy with the way students are using it,” Kinne says.

“They’re finding that students are more willing to just send a text message, or send some information. It doesn’t have to be a crime per se. It could be something like a big hole in the ground or any unsafe condition. They can actually take a picture and send it to Safety and Security, anonymously if they want.”

The application also enables the College to upload information on sexual assault prevention, resources for victims, Title IX protections, and a range of other data that will be available directly on users’ phones. Over the summer, Safety and Security staff will work with the company to customize the app, which should be available online for free in the fall.

The pledge developed by the community citizenship working group describes in broad terms the rights and responsibilities of Dartmouth students, says Professor of Computer Science Thomas Cormen, who co-chairs the group with Leigh Remy, director of judicial affairs.

“We designed it to have three short paragraphs—the first on the broad standards of Dartmouth, the second on the responsibilities of all members of the community, and the third on the educational values that we all hold,” Cormen says.

The statement is meant to offer a vision of the principles that guide life at the College, and are not tied to any disciplinary code, he says. Over the summer, the MDF team will narrow down ideas for integrating the pledge into the student experience.

“We wanted to keep it positive and remind people why they are here,” Cormen says.

“More broadly, the goals of our committee include creating an accountability structure that is consistent among the broad range of groups and promotes safety, inclusivity, and positive contributions to campus,” Hall says.

This working group set out to revise the existing social event management procedures, formerly known as SEMP, with an eye toward improving student safety, reducing dangerous drinking, aligning expectations with the reality of the social scene at Dartmouth, and increasing dialogue between students and the administration.

The new alcohol management procedures, now referred to as AMP, maintain the basic framework of SEMP but reflect policy changes recommended by President Hanlon and the MDF committee, including the addition of third-party bartenders at large open parties, and a security presence for the duration of these parties. The implementation phase will continue with direct discussions involving many social organizations on campus.