Nearly Half of Dartmouth’s Engineering Majors Are Women 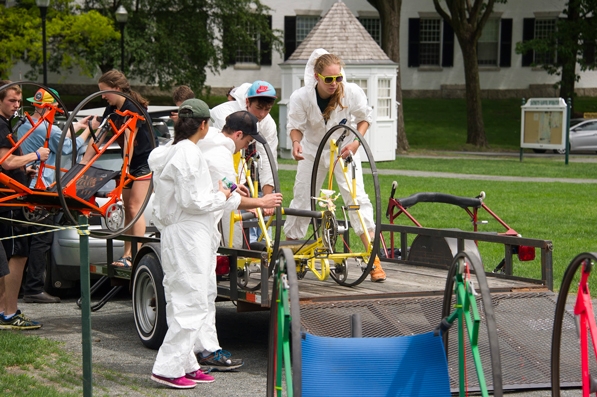 Kelsey Kittelsen ’17 may have been the only girl in her high school class to compete in an egg drop contest, and she’s likely to enter an engineering workforce that skews heavily toward men. But as an undergraduate at Dartmouth, she’s not facing a boys’ club when it comes to engineering.

The new numbers also represent a national milestone. For the past 10 years, just 19 percent of American students graduating with an undergraduate engineering degree have been women. Clearly, Thayer is doing something right to attract so many women undergraduates to engineering—and keep them there.

“I chose Thayer because I loved that I would be able to have a diverse course of study that includes both engineering and the liberal arts side of the school,” says Kittelsen, who is pursuing an engineering major modified with studio art and Thayer’s new human-centered design minor. “All of my close girlfriends are in the engineering program.”

Meredith Gurnee ’17 wanted an array of opportunities. “One of the main reasons I came to Dartmouth was because here I am allowed to play varsity soccer and go abroad. The fact that the engineering program has a foreign study program in Thailand really excited me,” she says. “I love how Dartmouth’s liberal arts environment allows you to get a degree in engineering, while also developing other areas to become a truly well-rounded student.”