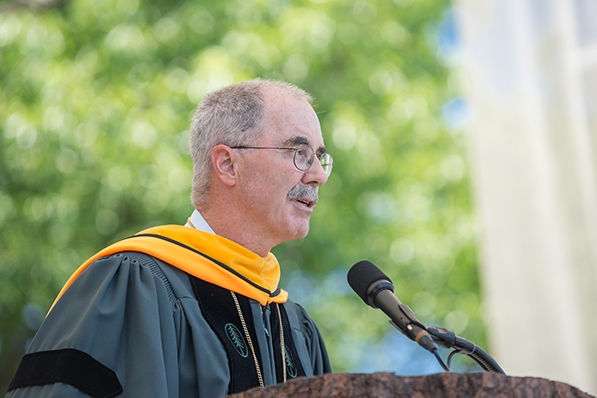 Graduates! Although you have had many things to say during your years here, tradition dictates that the President gets the last say.

Let me begin that by offering each of you, and your families, my heartfelt congratulations.

As you relish the pride of a challenge conquered as you prepare, with mixed emotions, to leave this place you will walk away from the Green today with diploma in hand but journey into the world with much, much more than that.

But I’m getting ahead of myself.

Let me first invite you to imagine a day not unlike today, but many years ago. It was May of 1773. And on that day a Dartmouth student, like each of you was preparing to leave the College.

Just down the hill—on the banks of the river—a headstrong freshman was putting the finishing touches on a canoe that he’d hewn from a tall pine. And while your emotions today are mixed, the truth is that this student desperately wanted to leave Dartmouth—because he heard adventure calling. His name was John Ledyard. And to the amazement of his classmates, he bade them farewell, climbed into that canoe and just took off! Our own Robert Frost, many years later, would dub him “the patron saint of runaway freshmen.”

Ledyard’s journey was only beginning that spring day. He would go on to sail the Pacific with Captain Cook and become the first American citizen to see the West Coast; he spent time in Lapland and embarked on a trek across Siberia. In Paris, he became close with Thomas Jefferson. John Ledyard attempted to see the entire world. Foreign study programs were rough in those days.

And years later, we remain captivated by his famous getaway—his departure just down the hill. But I want to focus on a different question: What did Ledyard take with him from Dartmouth that day?

In material terms, it was pretty simple—he took some food and some books. And in fact, his trip almost began with misadventure when he fell asleep reading Ovid just as he approached Bellows Falls.

But John Ledyard took from Dartmouth much more than these material possessions. He took something that Russ Carson and his classmates would take from Dartmouth 193 years later, in 1965. And Terry Plank in 1985. And Valerie Steele in 1978 and Bill Neukom in 1964. Something you take away from Dartmouth today. A spirit and character that’s been forged by four timeless truths about this institution:

First, the Dartmouth Fellowship. Ours is a community unlike any other, built around deep intellectual engagement. That begins with the faculty, scholars who teach—thought leaders who are passionately committed to their students’ intellectual growth and continues with our students, equally passionate about partnering with faculty, staff and each other to advance our understanding of the world. You will be part of this Fellowship, this Dartmouth family, forever.

Second, for nearly 250 years, Dartmouth has remained an institution with the liberal arts at its core. Firm in our belief that the broad knowledge and generally applicable intellectual skills that you take away from Dartmouth today are your best preparation to lead with creativity and confidence in an increasingly volatile and complex world.

Next, a profound sense of place. The beauty and the challenge of this setting The peace of the Connecticut River at first light and the majesty of sunset atop Mount Moosilauke. These North Woods have taught all of us that there are things in the world much grander than ourselves.

And finally, an adventuresome spirit. A certain ruggedness at Dartmouth, captured by Ledyard, but kept alive by each of you. A willingness to embrace challenge and opportunity, a readiness to try new paths, the courage to be bold and think big, whether in academics, the arts, business, government, or service.

So, The Dartmouth Fellowship, the Liberal Arts, these North Woods, an Adventursome Spirit, these things are the heart and soul of Dartmouth. And just like John Ledyard in 1773, you take them with you today.

But unlike John Ledyard, as you leave Dartmouth, there are no more continents to explore. For you, the challenges are even more formidable. Feeding a population soon to reach 9 billion; meeting their staggering demand for energy, or health care, or education; curing disease; alleviating poverty. The list goes on and on. These are the landscapes before you—partially known, as yet unconquered.

Your Dartmouth experience has forged in you the same independent, adventuresome spirit as the Ledyards and the Planks and the Steeles and the Carsons and the Neukoms before you. And, in the years ahead, you will need to dig deep and call upon these traits as you venture into the world beyond these woods and do what you can do to make it a better place.

And, in this journey, you will not be alone. Even John Ledyard found this, much to his surprise. “In Copenhagen, Petersburg and the Lowlands, in Paris and London,” he wrote, “in every corner of the globe I have encountered fellowship from the college at Hanover, and my heart has rejoiced.”

And today, I stand with the Class of 1965 and all of our alumni to tell you that our hearts rejoice as we welcome you into our ranks.

In the rich history of this institution, there will be only one Class of 2015, and now your journey begins. In it, you will fulfill John Ledyard’s dream—today your class casts off from the banks of this beloved place by the river in search of adventure, and together you will touch every corner of the globe. Your provisions are simple—you carry in your hand a diploma, you hold in your heart the Spirit of Dartmouth.

May that spirit mark all the days of your life as you follow your heart into unconquered landscapes before you.

We salute all you’ve accomplished here, and all that you will endeavor there.