TERRY ANN PLANK, it is the rare freshman who begins her journey at Dartmouth possessed of an unwavering commitment to a particular field of study. Though not surprising, it is nevertheless inspiring to see such a student rise to the top of her field as one of the world’s foremost geochemists and volcanologists. Dartmouth knew you as a “rock star” from the moment you arrived in Hanover. 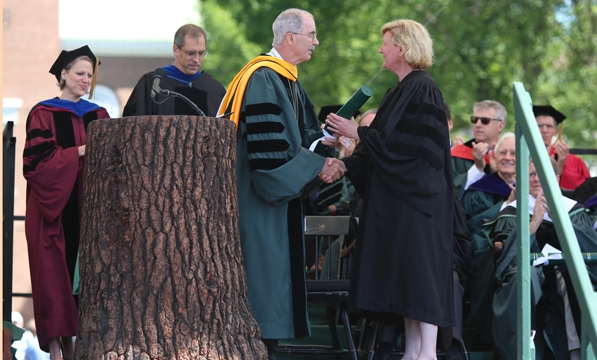 Terry Plank received an honorary degree from Dartmouth at its 2015 Commencement Ceremony. (Photo by Rob Strong ’04)

While growing up near a Delaware quarry, with a 175-foot rock wall at your door, might have offered an unusual opportunity for learning, your intellectual curiosity came from deep within. From your induction in third grade as the youngest member of the Delaware Mineralogical Society, your passion for the sciences only grew. At Dartmouth, you received no fewer than six citations of merit from the faculty, including one from your mentor John Lyons, who felt you stood in a class by yourself. Indeed, as a senior, you received a prestigious National Science Foundation Graduate Research Fellowship, setting you on a path of discovery that continues today.

Along this path, you have probed the hostile, unseen reaches of the earth’s crust, quantifying unfathomable forces that shape our planet and thereby our civilization. Examining the thermal and chemical interplay that drives the collision of tectonic plates and volcanic activity, you were recognized in 2012 with a MacArthur Foundation Fellowship for exceptional creativity in your work.

From the curiosity of a child to the promise of a scientist at the cutting edge of her field, your story speaks not only of the unfolding secrets of our natural world but of the timeless quest for intellectual discovery. For the mysteries you have mastered and those you continue to pursue, your alma mater is pleased to award you the honorary degree of Doctor of Science.