It was a pleasantly warm afternoon as more than 300 family members and guests entered the cool environs of Dartmouth’s Moore Theater to witness the commissioning of five graduating seniors as second lieutenants in the U.S. Army and the U.S. Marine Corps. 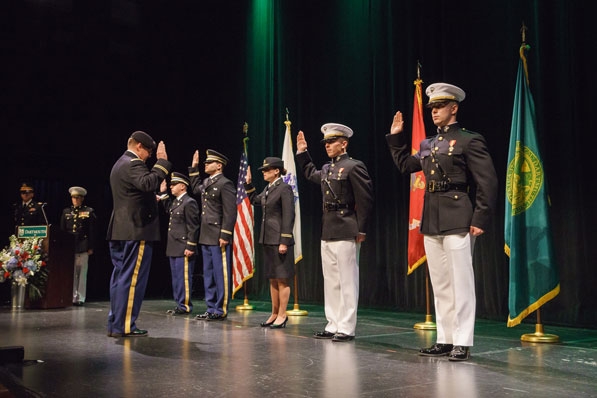 U.S. Army Col. (Retired) Frank P. Wagdalt administers the oath of office to the five new second lieutenants, one of whom is his daughter. (Photo by Eli Burakian ’00)

The five officers are:

It was an occasion of celebration, but a serious one marked by a degree of solemnity. The five, clad in the full-dress military uniforms, marched to center stage in single file.

Dartmouth Trustee Nathaniel (Nate) Fick ’99, who served as a combat Marine Corps officer, welcomed the five students and their families and friends.

“You are joining a long green line, a tradition of military service going back to [Dartmouth’s] founding,” he told the commissioning candidates.

Fick recounted some of that history. “Seventy-three Dartmouth alums served in the Civil War on both sides, and 3,407 served in World War I. During and following World War II, the numbers grew too big to track.”

He spoke of the 20 veterans now enrolled at Dartmouth and initiatives such as the Posse Veterans Program, with which Dartmouth is partnered, to encourage and attract armed forces veterans to the College. In closing, Fick addressed the five new officers directly, saying, “I salute you and wish you the very best.”

The seriousness of the event deepened with the reading of the commissioning warrants, setting out the responsibilities with which the new officers are charged. They were read by Army Capt. Keith Schnell and Marine Corps Capt. Jack Webb and were followed by the administration of the oath of office by Army Col. (retired) Frank P. Wagdalt, who is Monica Wagdalt’s father. 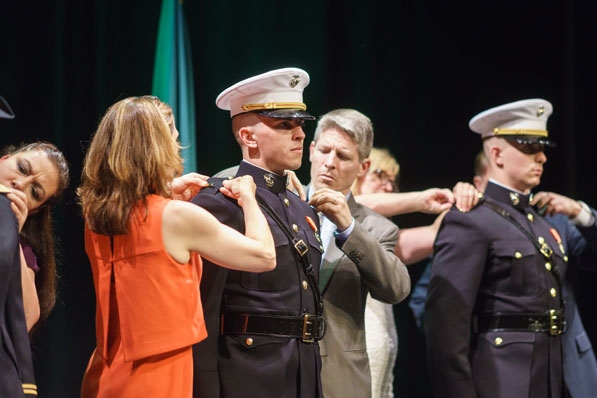 On a more festive note, family members and friends joined the new officers on stage to pin on their insignia—the twin gold bars of a second lieutenant.

President Emeritus James Wright spoke to the new officers and their families, in a tone both inspiring and cautionary.

“You honor us by your dedication and your commitment. As you have learned well over the last four years, Dartmouth is an institution that is enriched by its traditions. Among these, and one that I have regularly encouraged, is a tradition of service.

Wright, the Eleazar Wheelock Professor of History Emeritus, then shared “a word with the parents and grandparents here. I do understand the mixture of tremendous pride and of some gnawing apprehension you feel because of this path your graduate has taken.

“It is a scary world and these five remarkable men and women have decided that running from that world is not going to make it the less scary. And while this decision is theirs, I have a hunch that it is not a surprising choice, for they were brought up to accept responsibility and to try to make a difference.”