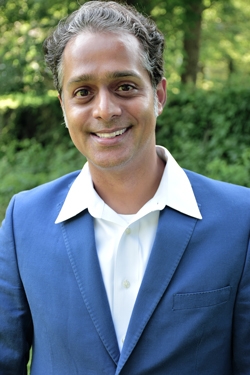 Rahul Sarpeshkar will begin his work as the inaugural Thomas E. Kurtz Chair in the William H. Neukom Academic Cluster in Computational Science on Sept. 1. (Photo courtesy of Rahul Sarpeshkar)

Sarpeshkar, whose interdisciplinary work is in bioengineering, electrical engineering, and biophysics, is the first scholar appointed to one of the College’s academic clusters. The clusters, designed by faculty from across the institution to address major global challenges, are part of President Hanlon’s vision for strengthening academic excellence at Dartmouth and among the programs supported by recent major gifts.

Sarpeshkar is the lead faculty member in the Neukom cluster, which will explore the computational and engineering principles of intelligence. His pioneering work on analog circuits and biological systems has created or discovered unifying computational motifs, principles, and circuits in biology, engineering, physics, and medicine.

“I am thrilled to join Dartmouth because of its vision and commitment to support cross-disciplinary research via the incredible Kurtz chair, its excellent and highly collegial faculty in all departments, the close proximity and relative lack of borders between its schools, and my ability to use the unifying language of analog and physical computation to impact many fields through the Neukom cluster,” says Sarpeshkar.

’One of the most creative scientific minds’

Sarpeshkar is currently a faculty member in MIT’s Department of Electrical Engineering and Computer Science. He holds more than 35 patents and is the author of more than 125 publications, including one featured on the cover of the journal Nature. He has authored a cross-disciplinary book in bioelectronics, Ultra Low Power Bioelectronics: Fundamentals, Biomedical Applications, and Bio-Inspired Systems.

“Rahul is a gifted scholar, innovator, and entrepreneur. He will bring new ideas and energy to Dartmouth as he opens pathways among critical areas of the institution. I am thrilled to announce his appointment and look forward to his arrival,” says Hanlon.

Sarpeshkar’s research group performs wet molecular-biology experiments in living cells and dry experiments with analog nano-electronic chips. The group’s work has applications in a number of fields, including medicine, biotechnology, bioelectronics, and bio-inspired and ultra-energy-efficient systems.

His dry-lab research involves electronics for implantable bionic systems and the creation of computer chips—known as very-large-scale-integration, or VLSI chips—for supercomputing, medical-device, and ultra-energy-efficient systems. His wet-lab research uses analog circuit design techniques to engineer advanced synthetic circuits in microbial and other cells for biotechnology and medical applications.

­­Sarpeshkar has won awards for his interdisciplinary bioengineering research, including the Packard Fellow award, given to outstanding young faculty; the National Science Foundation CAREER award; an Office of Naval Research Young Investigator Award, and the Junior Bose Teaching award at MIT. His work on a glucose fuel cell for medical implants has been featured by BBC Radio, The Economist, and Science News, and was highlighted by Scientific American as one of 10 world-changing ideas in 2012.

Provost Carolyn Dever describes Sarpeshkar as one of the most creative scientific minds of his generation. “Rahul’s vision, both for his own research and for the Neukom cluster, embodies the world-transformational aspirations of the faculty cluster initiative.”

Sarpeshkar earned undergraduate degrees in electrical engineering and physics from MIT and a PhD in computation and neural systems from the California Institute of Technology. After Caltech, he joined Bell Labs as a member of the technical staff in its physics department, and then joined the MIT faculty in 1999. In 2002, he was the first recipient of the Robert J. Shillman career development professorship at MIT.

’Exactly what we envisioned’

“I could not be more pleased with the outcome of this search. What we envisioned when we wrote the proposal for the cluster was someone exactly like Rahul, someone working at the intersection of several disciplines who would understand computation in a fundamentally new way,” says Ray.

The Neukom cluster, announced a year ago, will include three new faculty members in diverse fields who use advanced computational techniques in their work. Sarpeshkar’s position is named for Thomas Kurtz, the pioneering Dartmouth mathematics professor and computer scientist who, along with former Dartmouth President John Kemeny, created the BASIC computer language 51 years ago. In April 2014, the cluster was funded with a $10 million gift from Trustee Emeritus William Neukom ’64, who was chair of the Dartmouth Board of Trustees from 2004 to 2007. A significant cross-section of Dartmouth faculty have participated in two rounds of proposals for new faculty clusters, with five clusters funded one year after the program’s initiation.