Small class size: It’s one of Dartmouth’s strengths, of which students and faculty are proud. Small classes allow for individualized attention and feedback and let students develop close relationships with intellectual mentors who are top scholars in their fields.

But even at Dartmouth, not all classes can be small. Larger undergraduate classes are what Lisa Baldez, director of the Dartmouth Center for the Advancement of Learning (DCAL), and Josh Kim, director of digital learning initiatives, call gateway courses—introductory survey classes that fulfill major and distribution requirements and open doors to deeper study. 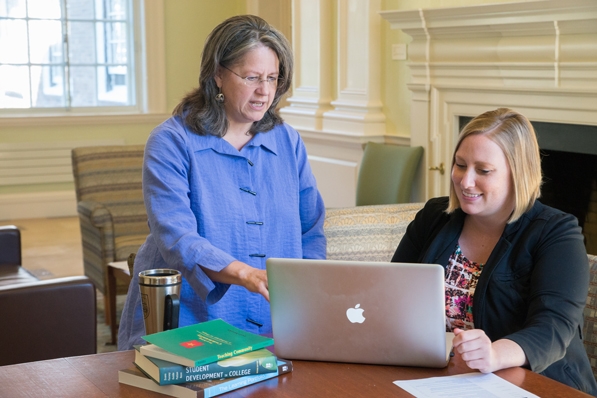 Rebecca Biron, professor of Spanish and comparative literature and dean of the College, works with instructional designer Ashley Kehoe on a new Gateway course that Biron will teach next year. (Photo by Eli Burakian ’00)

Last year, in collaboration with the Office of the Provost and Academic Computing and with funding from an anonymous donor, DCAL launched the Gateway Initiative—an effort to redesign large, introductory courses to allow more interaction between faculty and students.

The first Gateway Initiative courses were an introductory genetics course; a survey of ancient Greek and Roman culture; introduction to calculus; and a Russian class that explored Slavic folklore traditions.

“It’s not that these classes were somehow broken,” Kim says. On the contrary, he says, judging from student evaluations, “Some were among the most highly reviewed courses we had. But faculty see the Gateway Initiative as a way that they can meet their own teaching goals. The question was: Are there ways we can have these larger classes feel like smaller classes?”

The Gateway redesigns are collaborations among the faculty teaching the courses, instructional designers in computing, librarians, and other staff throughout campus.

“Faculty are used to being responsible for every aspect of their courses,” says Baldez. “Teaching is usually something we do pretty much alone. One of the most valuable parts of the Gateway Initiative is the opportunity to work together with a team that includes instructional designers, media production folks, librarians, and teaching assistants. As one of the Gateway professors said, ‘It’s hard to exaggerate how helpful it is to work with a team.’ ”

Professor of Mathematics Scott Pauls, who taught the redesigned calculus course, says working with instructional designer Adrienne Gauthier “pushed me hard to think about what skills and knowledge we wanted a student who took this course to walk out with—sort of reverse-engineering the course. At first, I said, ‘Look, calculus is calculus, we do these subjects in this order.’ And that’s still true—but if you don’t think about what you want the students to walk out with, you’re only going to get that by accident. I think that made a big difference in the success of the redesign.”

“Traditionally, biology at the introductory level is lecture dominated, but a lot of educational literature says the more active the approach in the classroom, the more students learn,” says Tom Jack, a professor of biological sciences who taught one of two sections of the redesigned genetics course. In the class, students viewed videos of short lectures before class and practiced problems in groups during class sessions.

Professor of Classics Paul Christesen ’88 also made use of the “flipped classroom” model, recording some lectures for students to watch before class. But the key shift the Gateway Initiative allowed him to make was to hire undergraduate TAs—classics majors who had already been through the course—to lead discussion sections and read students’ journals.

“Classicists always say the same thing—that a classroom is a student and a teacher sitting on the steps talking to each other,” says Christesen. “We need students to think and talk in small groups. The smaller the groups we have, the better job we do.”

The Russian class redesign will involve multiple members of the Russian department and take several years to implement. Associate Professor of Russian Mikhail Gronas, who taught the course this spring, says it is one of Dartmouth’s most popular humanities classes. Students both learn about Slavic folk traditions, from riddles to fairy tales, and act as practicing folklorists, collecting folk traditions from communities within Dartmouth and the Upper Valley.

“This is a big course, and we wanted to make it to feel a more interactive and playful,” Gronas says. “You don’t want to lecture all the time, because while lectures are important, knowledge is a two-way street.”

With Gateway, Gronas and his colleagues are introducing technologies to help shrink the experience of the classroom, including a virtual whiteboard that facilitates collaboration. And they are developing a permanent, searchable archive for students’ folklore projects.

Jack and his colleagues used lecture-capture tools, which allow professors to record class sessions and then make them available digitally. They also used polling applications that allowed students to respond to questions posed in class. “Students could answer on their laptops, and we could see the results immediately. They had to participate.”

Having immediate information about what students understood, or didn’t, “was valuable, because I could address it right away,” Jack says.

For the math course, Pauls collaborated with Khan Academy, the educational nonprofit that offers online instructional videos and practice exercises. “For me, the great part of working with Khan is that you get this very refined set of analytics that would let me design classes around what students were having trouble with,” says Pauls. “So class time was much more customized.”

Pauls is working on a statistical analysis of how students in the redesigned class performed compared to students who took the math class before the redesign. “I’m trying to identify student profiles that can serve as templates for success. I can use that to raise red flags for students who aren’t on the path I want them to be on, so I can intervene much earlier than the first major test.”

Though redesigning the course was labor intensive, “it will be easier next time” he teaches it, he says. And compared to the lecture model he used to teach the class before Gateway, “I have more close interaction with students now, and that’s way more fun.”

The Next Generation of Gateway Courses

DCAL has announced the next round of courses to participate in the Gateway redesign process in the coming year. The courses—from across the social sciences, humanities, and sciences divisions: