This story originally appeared in the Summer 2015 issue of the Hood Museum of Art’s Quarterly.

Sometimes a moment of experiential learning represents such a profound confluence of art, technology, and critical inquiry that it deserves a retelling outside of the classroom (or, in this case, the Hood Museum of Art’s Bernstein Study-Storage Center), and this is exactly what happened for the winter term engineering class, “Integrated Design: Engineering, Architecture, and Building Technology,” one of the 62 classes that studied at the museum between January and March. 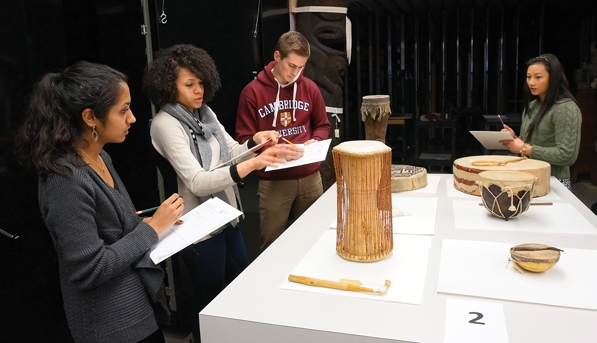 Students from the course, “Integrated Design: Engineering, Architecture, and Building Technology,” in the Bernstein Study-Storage Center. (Photo by Amelia Kahl)

The class met multiple times at the Hood to engage in a “Learning to Look” exercise that related the museum’s collection to the academic engineering experience, under the auspices of Associate Professor of Engineering Vicki May and Jack Wilson, a senior lecturer of studio art and a lecturer of engineering, as well as Hood Foundation Curator of Education Lesley Wellman and Senior Curator of Collections and Barbara C. and Harvey P. Hood 1918 Curator of Academic Programming Kathy Hart.

Part of their museum exercise involved examining “mystery objects” from the Inuit collection, including snow goggles and a hide scraper, from the perspective of form and function, design and material. “I don’t like to listen to me talk for 50 minutes, so I’m sure they don’t like it either,” May said, in a 2013 story for Thayer School of Engineering that announced her naming as New Hampshire Professor of the Year, about her approach to teaching and her practice of connecting students with real projects. “There’s lots of theory, and that’s important, but being able to tie everything together by actually building something gets students excited and helps them learn, because they see a real context to all the math and science they’ve been doing.”

At the museum, students broke into small groups to answer a set of questions about these “mystery objects” in the museum’s study-storage center, including the following: What materials have been used to make them? Do the objects appear to be functional, ornamental, or both? How do these objects relate to the human body? What sorts of technology appear to have played a role in the design or construction of these objects? What do the objects tell you about the society in which they were made? The class then got together to report their findings, and left with an assignment to create their own utilitarian object based on those observed at the Hood.

Along the way, Wilson noticed “that the students could not handle the objects”—this responsibility is reserved for the museum’s art handlers and curators—and “had the idea that we could use the portable 3-D scanner at Thayer to scan some of the objects and make 3-D prints.” He successfully reproduced two objects—Iñupiaq snow goggles and an Iñupiaq hide scraper—as 3-D prints made of a white composite material. He offered the prints to the museum to store and use in tandem with the actual objects whenever they are used for teaching.