New Hood Exhibition Reveals Another Side of Canaletto’s Venice

Beginning Aug. 1, the Hood Museum of Art will present an exhibition of 30 etchings from the museum’s collection that represent a nearly complete set of Venice-inspired prints by Giovanni Antonio Canal (1697–1768). 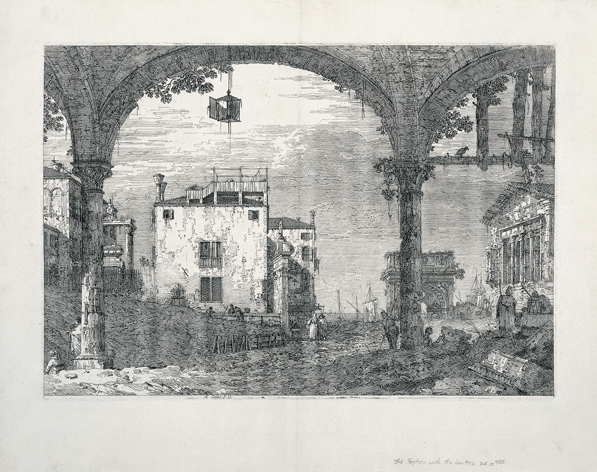 Known as Canaletto, the artist is famous for his luminous, sweeping views of the Grand Canal and Piazza San Marco. The Vedute, a series of prints he made in the early 1740s, reveal another, often more modest, side of Venice. These scenes are intimate in scale and depict an extraordinary variety of subject matter, encompassing both real and imaginary views, from urban portraits to bucolic landscapes. This exhibition presents the full range of Canaletto’s Vedute project while celebrating the legacy of Adolph J. “Bucks” Weil, Class of 1935, an astute and generous collector who assembled the suite of etchings and over his lifetime amassed one of the most impressive collections of Old Master prints in the country.

Weil’s many gifts to the Hood include prints by such artists as Albrecht Dürer, Lucas van Leyden, Rembrandt van Rijn, Jacques Callot, and Francisco Goya. The Vedute etchings were donated to the museum by Jean K. Weil, following the wish of her late husband. Through this exhibition devoted to Canaletto, the Hood is honored to highlight an important facet of Weil’s distinguished collection in recognition of the 100th anniversary of his birth.

It is difficult to imagine an artist more intimately associated with a city than Canaletto. For centuries, his name has been synonymous with topographical cityscapes of Venice known as vedute (views). His meticulously detailed paintings of such familiar vistas as the Grand Canal and Piazza San Marco celebrate the city’s beauty and became coveted mementoes for English gentlemen to bring home from the Grand Tour. Given his fame as a landscape painter and the demand for his trademark Venetian scenes, it is remarkable that he turned, albeit very briefly, to a new medium and format for his art. 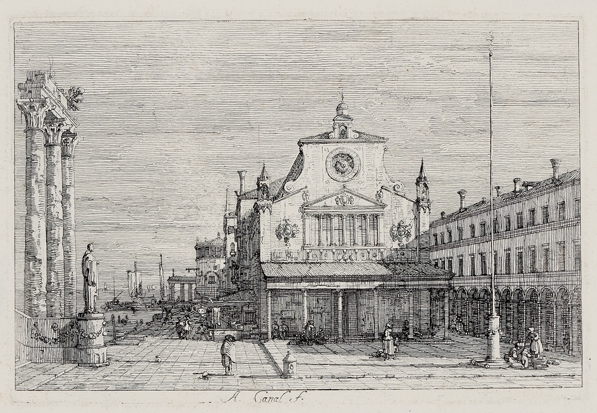 In the early 1740s, Canaletto embarked on a project to create a series of etchings dedicated to (and most likely financed by) Joseph Smith, the British consul to the Venetian Republic, who acted as his agent on behalf of foreign collectors. Unlike his painted views of Venice, the Vedute prints present an unexpected side of the artist and offer an alternate window into 18th-century Venetian life. Creative, and at times whimsical, the scenes are often pastiches of real places and imaginary views. With few exceptions, they show the more humble, everyday aspects of the city, such as modest dwellings and little byways; others are fantasies, ranging from elaborate caprices to intimate backyard scenes and wild landscapes. The Vedute prints thus reveal an unknown artist and a hidden city and its environs, well beyond the vision packaged for tourists and outsiders.

After years of precisely transcribing the glory of Venetian tourist sites, Canaletto clearly delighted in the creative freedom of this project, combining disparate elements to create a romantic portrait of the Venice he knew so well. With unfamiliar etching tools in hand, he flourished with newfound spontaneity and economy of line. Even in the few recognizable Venetian scenes included in the series—“La Libreria”, for example—Canaletto downplays the soaring architecture to focus on aspects of everyday Venetian life, such as children playing, nuns promenading, and merchants haggling.

Offering combinations of fantasy and reality, inventive conflations of the romantic past with a precarious present, and a peek at the domestic side of Venice, the Vedute represent a significant departure from Canaletto’s previous work. Equally, they reveal an unexpected virtuosity in a medium that was entirely new to the artist. The reason for Canaletto’s shift to printmaking at the peak of his fame as a landscape painter remains unclear. In part, the Vedute prints may have been an answer to the artist’s critics and detractors, who favored a more imaginative, rather than topographical, approach. For all of their inventiveness and skillful yet spontaneous execution, they are now considered some of the finest examples of etching of the eighteenth century.

The Canaletto exhibition is complemented by an installation of eight late-19th- and early-20th-century American etchings of Venice by James McNeill Whistler and his circle, all of them taken from the Hood’s collection. Whistler, who greatly admired Canaletto, was a major influence in the development of the late 19th-century American etching revival.