Dartmouth to Be Represented at Alaska GLACIER Meeting

The state is feeling the dire effects of climate change in more direct and tangible ways than most of the rest of the country, says Myers Family Professor of Environmental Science Ross Virginia, director of Dartmouth’s Arctic Institute within the John Sloan Dickey Center for International Understanding and co-lead scholar for the Fulbright Arctic Initiative. 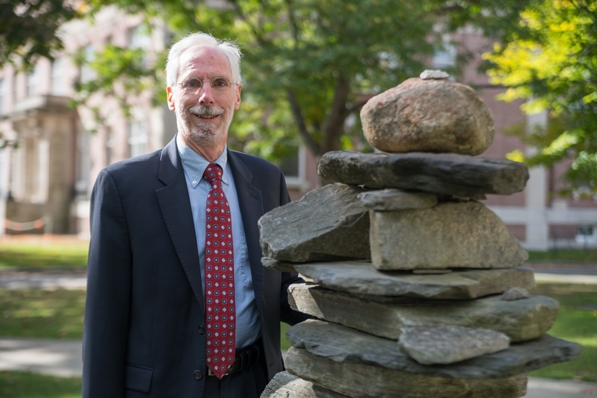 “I’m particularly excited to hear what President Obama has to say about the Arctic,” says Professor Ross Virginia. “This is an important opportunity to share with the American people why we care about Alaska as part of the Arctic.” At right is Peter Irniq’s 2007 sculpture “Inuksuk,” which stands in front McNutt Hall. (Photo by Eli Burakian ’00)

And now for the first time, a president of the United States is coming to Anchorage, Alaska, to address these issues in an international arena. Virginia, representing Dartmouth, will be there.

President Barack Obama is traveling to Anchorage this month to participate in the Aug. 31 Conference on Global Leadership in the Arctic: Cooperation, Engagement and Resilience (GLACIER).

Expected to attend the State Department–organized GLACIER conference are foreign ministers of the eight countries that belong to the Arctic Council—Canada, Denmark, Finland, Iceland, Norway, Russia, Sweden, and the United States—as well as delegates from more than a dozen Arctic Council observer states. In May, the United States assumed leadership of the council for a two-year term, with Secretary of State John Kerry serving as chair.

While GLACIER is not an Arctic Council event, Virginia says, “It’s very much connected to the U.S. chairmanship agenda, which is focused on the safety, security, and stewardship of the Arctic Ocean, its adaptation to climate change, and the economic well-being of people of the North.”

Outside of the ministerial delegations, only about 350 individuals have been invited to the conference. “It’s a hot ticket,” says Virginia.

He hopes the meeting will spur “a coordinated approach from the Arctic nations around climate change” as they prepare for the next major international talks on limiting carbon dioxide emissions—the COP21 United Nations Climate Change Conference in Paris this December.

“I’m particularly excited to hear what President Obama has to say about the Arctic. This is an important opportunity to share with the American people why we care about Alaska as part of the Arctic.”

Virginia says his attendance at GLACIER “is an acknowledgement of Dartmouth’s leadership role in Arctic and polar science and policy—which is connected to my opportunity to be co-lead scholar for the Fulbright Arctic Initiative.”

For him and the Fulbright Arctic scholars, the conference represents a significant networking opportunity. “We’re there as ambassadors for the research, for the connections, for highlighting the role of Fulbright as developing new scholarship that’s applied to policy. It’s a great opportunity for us to show the power of this cross-Arctic collaboration among scholars who are trying to generate new knowledge that applies to the kind of problems that the ministers will be talking about.”

In addition to attending the plenary sessions and a variety of other events before and after the GLACIER conference, Virginia says he and the Fulbright Arctic scholars plan to meet and share their research with Obama science adviser and Director of the White House Office of Science and Technology Policy John Holdren and Ambassador to Sweden Mark Brzezinski ’87, who earlier this month was named executive director of the U.S. Government’s Arctic Executive Steering Committee.

“Holdren is the person directing U.S. science policy and science information flow from the White House to everybody else,” Virginia says. “I want to find out what he wants to learn while he’s in Alaska and how those of us who work on this every day can better share that with him. I hope that he will see that the Arctic can be an ally in advancing a global agenda in science politics and policies. I think he will learn some things from this trip to Alaska that will make him even more effective.”

Dartmouth will be represented by at least one other person at GLACIER: Leehi Yona ’16, who is doing her senior fellowship project on Arctic climate policy. Yona will travel to Alaska with funding from a Stamps Leadership Scholar Award.

“She’d been trying every which way she can to get into the meeting, and she couldn’t get an invitation directly,” says Virginia, who is Yona’s fellowship adviser.

Instead, he says, she managed to obtain a press credential to write about the Fulbright initiative and youth engagement in climate change issues. “She’s that resourceful.”