Arctic postdoctoral fellow Lauren Culler recently returned to Hanover from doing fieldwork in Greenland, where Dartmouth had just taken the helm of the U.S. contribution to the Joint Science Education Program (JSEP), a program jointly led and funded with the government of Greenland. “It was absolutely fantastic,” says Culler, outreach coordinator for the Institute of Arctic Studies at the John Sloan Dickey Center for International Understanding. “It was so much fun and really inspiring, spending three weeks in Greenland with 15 high school students.” 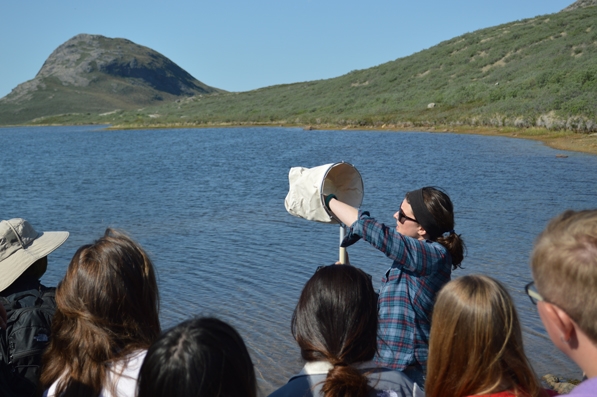 Arctic postdoctoral fellow Lauren Culler demonstrates the use of a “D-net” for collecting aquatic invertebrates from lakes in Greenland. (Photo by Erica Willstrom)

Newly funded by a three-year, $500,000 grant from the National Science Foundation (NSF), the Dartmouth-led field experience involved high school students and their teachers from Denmark, Greenland, and the United States, as well as graduate students from Dartmouth—the JSEP fellows.

In June, six JSEP fellows went to Greenland to work with the high school students, teaching and mentoring them on independent research projects. Two of the fellows were from Thayer School of Engineering, one was from the Department of Earth Sciences, and three came from the Graduate Program in Ecology and Evolutionary Biology.

Arctic Institute Director Ross Virginia is the principal investigator on the NSF JSEP grant, and Culler is a co-PI, along with Professor of Engineering Mary Albert and Professor of Biological Sciences Matthew Ayres. “Mary and Matt have been working on campus, helping the graduate students get organized around their research and outreach programs,” says Culler. “Ross and I went to Greenland with the JSEP group, oversaw the whole program, and did some teaching and mentoring as well.“

The students studied glaciers, arctic plants, permafrost, and lakes. “The overall goal was getting the students to learn to ask testable scientific questions and work with the graduate students to design and complete a project,” says Culler. As part of the program, the students were encouraged to talk about their experience and what they’d learned when they returned to their high schools.

“One of our goals is disseminating the products from this program to a much broader audience,” Culler says.

“What is really great is that this became a cross-cultural experience for everyone involved, with multinational and multilingual students,” she says. “Also, there were researchers from all around the world in Greenland doing science, interacting with the students and teachers, and teaching about their science in a field setting.”

JSEP had been running in Greenland since 2008, and Dartmouth graduate students and faculty have been working informally with the program since 2011. With the award of the grant on March 1, 2015, the College assumed a leadership position for the U.S. contribution.

“Dartmouth’s participation adds a real depth and richness to the science that JSEP students can access,” says Elizabeth Rom, program director for NSF’s Division of Polar Programs. “The Dartmouth graduate students inspired the JSEP students how to think about the Arctic environment as a scientist would.”

“The new Dartmouth leadership of JSEP has only been possible because of the work that we were doing with IGERT,” says Culler.

The high school students were also given an opportunity to practice their outreach skills. “We took them to the airport where they met a daily flight from Copenhagen with as many as 300 people. They set up tables and all the students wore their JSEP Greenland T-shirts.  “They started just walking up to people and showing them specimens and videos they made. It was so cool to see them engaged in sharing what they were doing,” Culler says. “It was one of the most heartwarming moments because the students—speaking three languages—could talk to almost everyone in the airport.”

As a follow-up, Dartmouth will host a one-day workshop with JSEP Lead Educator Erica Wallstrom, from Rutland, Vt., on Oct. 5. Each graduate student fellow will be paired with two teachers from New Hampshire or Vermont during the workshop. The teachers and the graduate students will work together to expand upon the lessons learned in Greenland, turning them into something useful for teaching in high school classrooms.

“We are going to have the graduate students actually go visit the classrooms and share their experience and help the teacher implement the activity in the classroom,” Culler says. “Even though the students can’t go see a glacier, they can still do something in the class and learn about it.”