Dartmouth football heads into the fall with the highest preseason Ivy League ranking in 18 years and an arsenal of high-tech tools that Big Green head coach Buddy Teevens ’79 expects will reduce injuries and give all his players virtually unlimited practice time on the field. 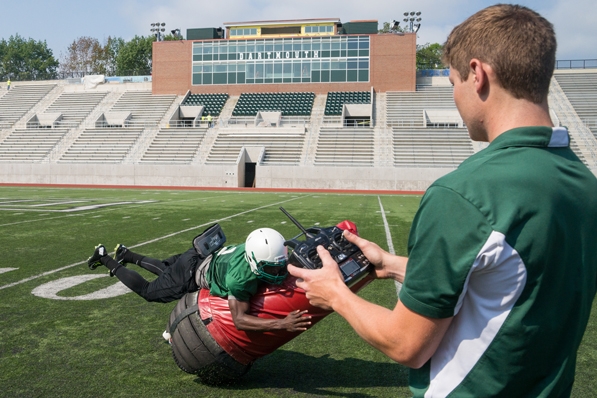 Victor Williams ’16 tackles the Mobile Virtual Player, which he and his teammates will use at practice. Quinn Connell ’13, Thayer ’14, controls the device, which he and other Thayer engineers helped develop. (Photo by Eli Burakian ’00)

Dartmouth has also secured exclusive Ivy League-rights to a virtual reality practice technology, known as STRIVR, that uses an Oculus Rift headset and a customized multi-camera device designed to take video in all directions. The system allows players to put on the headset and be totally immersed in a live-action practice with their teammates on their home field.

“This is cutting-edge stuff. Eventually everyone is going to want to have this. This puts us ahead of the curve,” says Teevens, the Robert L. Blackman Head Football Coach. 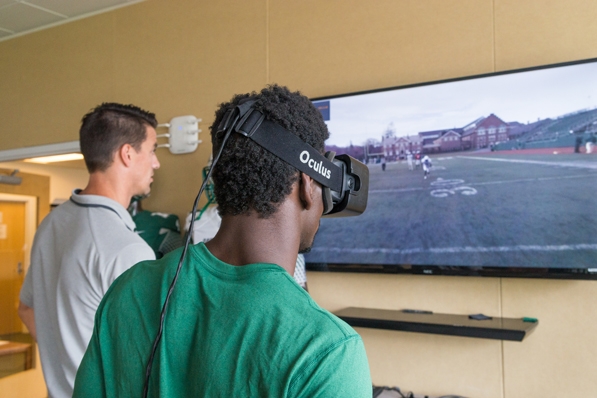 Victor Williams ’16 wears the Oculus Rift headset for a demonstration of the device. At left is Joey McIntyre, director of football recruitment and external relations. (Photo by Eli Burakian ’00)

The College will have both the STRIVR all-direction video technology and the MVP system on display Aug. 26, the first day of practice. Teevens says the program is still learning to use the STRIVR video equipment, but the hope is that, eventually, second- and third-team players will be able to be “in the play” for a high number of repetitions, normally only available to a first string players.

And the MVP tool will allow for blocking and tackling practice that cuts the chance of injury significantly, says Teevens, a nationally known leader in efforts to reduce injuries in collegiate athletics.

“Health is a huge thing in our game, and certainly in this league,” says Teevens, who led the Big Green to the Ivy League title in 1978 as Dartmouth quarterback and Ivy Player of the Year.

It was this concern that prompted Teevens two years ago to support the MVP project, brought to him by a former Dartmouth defensive tackle, Elliot Kastner ’13, Thayer ’14 and ’15.

Since then, Thayer Research Engineer John Currier ’79 has worked with Kastner and other Thayer students to develop the prototype. The researchers have a patent pending and are developing a business plan with the Dartmouth Entrepreneurial Network. The MVPs are to be marketed to pro, college, high school and youth teams in the near future.

Dartmouth’s ground-floor access to the STRIVR virtual reality training technology also began with two of Teevens’ former players from his time as head coach at Stanford University. Former Cardinal place-kicker Derek Belch and past Stanford and NFL quarterback Trent Edwards developed STRIVR and have made the system available to a handful of professional and college teams, including the Dallas Cowboys, Auburn, and the Baltimore Ravens. Dartmouth has exclusive Ivy League rights to the system for two years.

While the STRIVR and MVP technology is only as good as the team that uses it, Teevens says, “We hope it makes a difference and we think that it will. It certainly supports our program’s intention to be a center for innovation in teaching and playing the game of football.”