“The humanities deal with something you literally cannot live without—the ability to tell stories and to interpret other people’s stories,” says Graziella Parati, the new director of the Leslie Center for the Humanities. 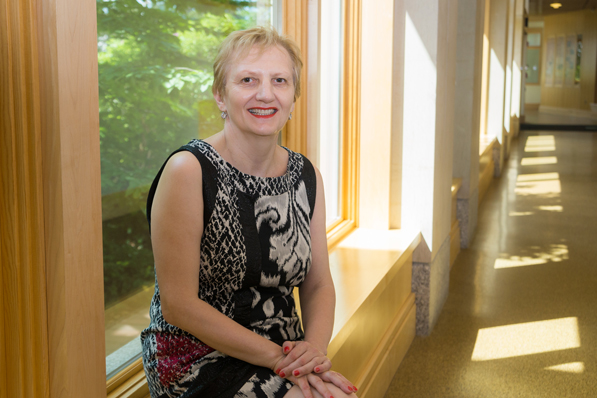 Graziella Parati says she wants to see more investment in digital humanities projects, and to help faculty involved in such projects connect with each other. (Photo by Eli Burakian ’00)

“It’s the ability to understand that in other people’s stories there is your story, and through that, to be able to create communities,” she says. “If you really want to become a citizen of the world, you have to have the humanities. You have to be able to be open to otherness.”

Parati, the Paul D. Paganucci Professor of Italian Language and Literature, began her role at the Leslie Center this summer. “I’m very grateful for this amazing opportunity,” she says.

“The Leslie Center provides a critical space where scholars in the humanities share ideas, collaborate, and push the limits of innovation,” says Michael Mastanduno, dean of the faculty of arts and sciences. “Graziella is an outstanding scholar and teacher, and I’m so pleased that she has agreed to take on this leadership role.”

Among her plans for the center, Parati, who also holds appointments in comparative literature and women’s and gender studies, says she wants to see more investment in digital humanities projects, and to help faculty involved in such projects connect with each other.

She’s seen firsthand how technology can transform the way scholars in the humanities work as collaborators on the Dante Lab (formerly the Dartmouth Dante Project), which has digitized 700 years’ worth of commentary on The Divine Comedy and made available translations in a number of languages.

“We asked, what does it mean to write a commentary to a medieval text in the 21st century?” she says. “Technology can be useful not only for research in the humanities, but for teaching—for allowing a text to be read everywhere in the world. It’s this kind of openness to changes that I find particularly interesting.”

She also wants to bolster programs that support junior faculty, particularly those working on first books, and to increase the sense of community among humanities faculty at all levels. “I look forward to transforming the center into a hub where people come to share what they’re working on, their teaching, their research. It’s a space where, yes, collaborations are developed—but also affective relations are created, a community.”

And she envisions a greater place for undergraduates at the Leslie Center, which in the past has focused primarily on supporting faculty research. In the coming year, Leslie will encourage students working on senior theses in the humanities to use the center as a space to write and receive mentoring from graduate students in comparative literature. “I would also like to have a prize for the best senior thesis in the humanities,” Parati says.

Overall, she plans to expand the center’s efforts to encourage innovation and collaboration both within the humanities and across the divisions. “Maybe because my own research is between the humanities and the social sciences, I think it’s an interesting way of thinking of the future, and of the humanities as a huge umbrella under which a lot of different kinds of research can fit,” she says.

Parati’s own recent research uses the theoretical lens of affect theory—that is, the connection between emotional experience and the physical world—to examine issues of migration as seen through the writings of first- and second-generation immigrants to Italy. “I’m interested in removing our at times obsessive emphasis on cognition, and seeing what else we can use to understand the world.”

Growing up in Milan, Italy, Parati says she “felt the urge of knowing something different.” She was in the first generation of her family to go to college. “My father could read, but he couldn’t write, so in a generation things changed quite dramatically.”

That urge to know more of the world led her to study in the U.K. and eventually the United States, where she earned her master’s degree from the University of Washington and her PhD from Northwestern.

She taught for a year at the University of Colorado, Boulder, while finishing her dissertation, and then traveled across the country for an assistant professorship in Dartmouth’s Department of French and Italian, in 1992.

Hanover, she says, “was the first countryside place I’d ever lived in and I thought, oh no! How can I live here? After 24 years, I’m still here.”