‘One Hundred Years of Solitude’ on the Green

Jett Oristaglio ’17 is reading Márquez’s novel aloud a chapter at a time.

Walk across the Green near dusk on any given evening this summer and you may find yourself in the fictional Columbian town of Macondo, embroiled in the saga of the Buendia family, smack in the middle of the imagination of Gabriel García Márquez. 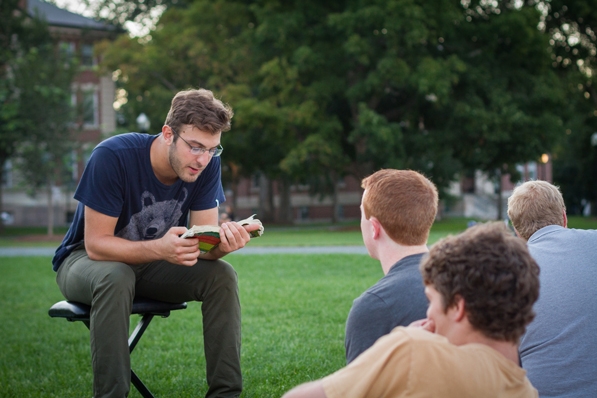 “The story is so cyclical, so expansive, so fragmented that you can step in anywhere and just fall in love with the characters and the beauty of it,” says Jett Oristaglio ’17. (Photo by Josh Renaud ’17)

The conjurer of this transportation is Jett Oristaglio ’17, a cognitive science major and varsity soccer goalkeeper from Boston. Almost every night for the past couple of weeks, Oristaglio has set up a blanket and a stool on the Green, lit some citronella candles against mosquitos, and read aloud a chapter of his favorite novel, Márquez’s One Hundred Years of Solitude, for anyone who wants to listen.

The project emerged partly from a sense of disappointment, Oristaglio says. “There’s little impromptu performance here. Maybe it exists, but I haven’t found it. I was visiting a friend in Berkeley and at 9 p.m. we turned a corner and there were 100 people swing dancing. I’ve been craving that kind of energy at Dartmouth, so this summer I decided, why not do something?”

Inspired in part by a family friend who once read James Joyce’s Ulysses aloud at a café, Oristaglio says, “I had the time, it’s nice out, there was a book I wanted to read again. Worst-case scenario, I reread one of my favorite books. Best case, someone shows up and it becomes something, even for one day. In some sense this is me trying to figure out what Dartmouth is, if there’s anyone else who’s been looking for this kind of event.”

He chose One Hundred Years of Solitude—a book he first read at the recommendation of Dean of the College Rebecca Biron, who taught his first-year humanities course—because, he says, “either everyone has read and loved it, or hasn’t read it but has been told that they have to read it. So when they hear that I’m reading it, people usually sit down and take it in for a bit.”

He’s not concerned about listeners entering or leaving the narration at different points. “The story is so cyclical, so expansive, so fragmented that you can step in anywhere and just fall in love with the characters and the beauty of it.”

And the reactions from the audience? “One day one of my friends, who has read the book several times, would say lines with me from memory,” Oristaglio says. Other days, “people have been engrossed, and it’s just silent except for my voice.”

He welcomes all comers, he says. “I went into this prepared to spend 10 nights reading alone to myself. Part of this is me howling into the wild to see who will howl back. The fact that anyone is listening is not just reassuring but inspiring.”