Endowed professorships honor faculty whose scholarship, teaching, and service exemplify the best of Dartmouth. In 2015, 10 members of the Faculty of Arts & Sciences have been named to endowed chairs. 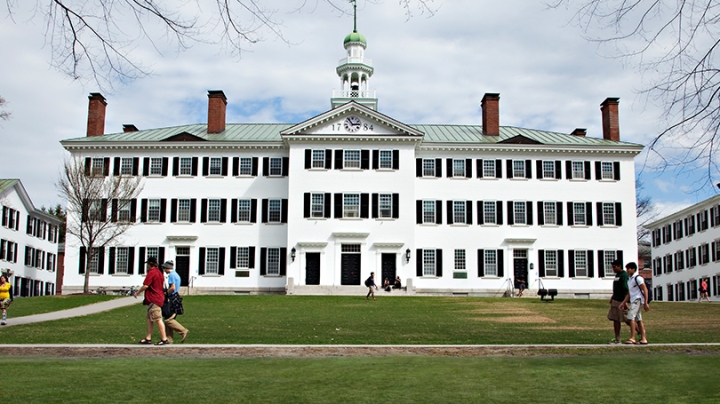 "I don’t believe that you can understand American history and culture without understanding the role of religion, and that has informed my intellectual agenda," says Balmer, a professor of religion and chair of the religion department. A prolific scholar of American religious history, Balmer is the author of several books, including, most recently, Redeemer: The Life of Jimmy Carter.

Susan Brison, a professor of philosophy, specializes in free speech theory, working at the intersection of philosophy, law, and politics. Currently, her research focuses on freedom of expression in the age of the Internet. Brison has taught at Dartmouth since 1985. “This is a place where one can be valued as a complete person,” she says. “I’m able to be a teacher-scholar here and bring my whole self to the task.”

Kathryn Cottingham, the Dartmouth Professor in the Arts and Sciences

Kathryn Cottingham joined the Department of Biological Sciences 18 years ago. Chair of the department, she is also a professor and co-chair of the ecology and evolutionary biology graduate program. “My favorite days are the days in the field with my students,” she says. “I get to work with the best undergraduates in an intimate, hands-on situation, and I have graduate students and postdocs and am able to conduct a full-fledged research enterprise. There are very few places in the world where you have that best of both.”

“I always try to bring my scholarship to class so students become more involved,” says del Pino, a professor of Spanish at Dartmouth since 2004. He studies modern and contemporary peninsular Spanish literature and culture. Editor and co-editor of several books and author of numerous scholarly articles, two volumes of criticism, and three collections of poetry, del Pino is currently organizing a fall conference at Dartmouth called “Dalí, Lorca, and Buñuel in America.”

"One thing that I’ve been learning is the kind of gentleness that’s needed in the criticism I give students,” says Kotlowitz a lighting and projection designer, professor, and current chair of the theater department. It’s hard to know what is a purely aesthetic critique and what is a true critique of something simply not being done right. Part of that is in trying to find the student’s voice in the work.” His designs for more than 200 professional productions have been seen in theaters throughout New York City and around the country, as well as in nearly a dozen European countries, from Paris and London to Lithuania, Norway, and Greece.

A professor of film and media studies and comparative literature, Amy Lawrence came to Dartmouth in 1988. She is the author, most recently, of The Passion of Montgomery Clift, as well as a book on the films of director Peter Greenaway and of Echo and Narcissus: Women’s Voices in Classical Hollywood Cinema. Her interests include the phenomenon of Hollywood stardom, feminist issues in film, the use of sound in cinema, and reality television.

“What makes teaching at Dartmouth rewarding is that the classes are small and the students are smart and engaged, and you can have a back-and-forth,” says Erzo Luttmer. A microeconomist, Luttmer studies social insurance programs such as Medicaid and Social Security. Born in the Netherlands, he came to the United States to earn his PhD at Harvard. Following appointments at the Harris School of Public Policy at the University of Chicago, the World Bank, and Harvard’s John F. Kennedy School of Government, he joined the Dartmouth economics department in 2010.

Darren McMahon joined Dartmouth’s history department this year from Florida State University. His recent books include Happiness: A History, which was named among the best books of the year by The New York Times, The Washington Post, Library Journal, and Slate; and Divine Fury: A History of Genius. His writings have appeared in The New York Times, The Washington Post, The Boston Globe, and The Wall Street Journal, among other publications, and he is currently working on a history of light during the Enlightenment.

Dale Mierke, the Frank R. Mori Professor in the Arts and Sciences

Dale Mierke is a professor of chemistry and chair of the chemistry department. His research focuses on determining promising molecules for therapeutic uses, particularly in treating cancer and addictions. A former Fulbright Scholar at the Technical University of Munich, Germany, he taught at the University of Massachusetts Medical School and Clark University before joining the faculty of Brown University in 1998, where he had held appointments in chemistry and molecular pharmacology. He came to Dartmouth in 2007.

Robert Staiger joined the faculty of Dartmouth’s economics department this year, following a stint as the Roth Family Distinguished Visiting Scholar in 2013. Previously he was the Stockwell Professor of Economics at the University of Wisconsin. An expert on international trade policy, he is a fellow of the Econometric Society, a research associate of the National Bureau of Economic Research, a reporter for the American Law Institute, and editor of the Journal of International Economics.