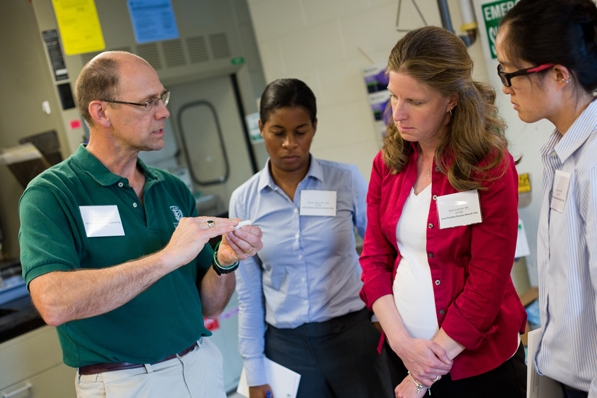 Fourteen employees from the FDA’s Center for Devices and Radiological Health spent two days at Thayer’s Biomedical Engineering Center for Orthopedics as part of the federal agency’s Experiential Learning Program with hospitals, universities, and medical manufacturers nationwide. The Thayer visit was designed to help the FDA staffers better understand implant technology and why implants sometimes fail, whether for mechanical, biological, chemical or other reasons—knowledge that can improve their review of manufacturers’ applications for new devices for safety and effectiveness.

Thayer staffers used hands-on demonstrations in small groups in the laboratory to explain how they retrieve and analyze orthopedic implants. Thayer’s lab has more than 15,000 orthopedic devices—in a database and in climate-controlled storage—that have been removed from living or dead patients over the past four decades. Some were removed after just a few months, while others had been in place for more than 20 years. The lab collects the implants from over 800 surgeons around the world, and is one of the few labs that assess why orthopedic devices fail.

“The trick is to see these devices in the context of the larger biological, mechanical, and chemical system,” says Assistant Professor of Engineering Douglas Van Citters, who developed the two-day educational program and organized the FDA visit. “Our approach is very thoughtful and interdisciplinary, with a statistical power that comes from large numbers of devices. This portion of our lab looks for unexpected results that didn’t show up in companies’ testing and government approval, because our job is to act as an impartial early warning system for surgeons, patients, manufacturers, and the government.” 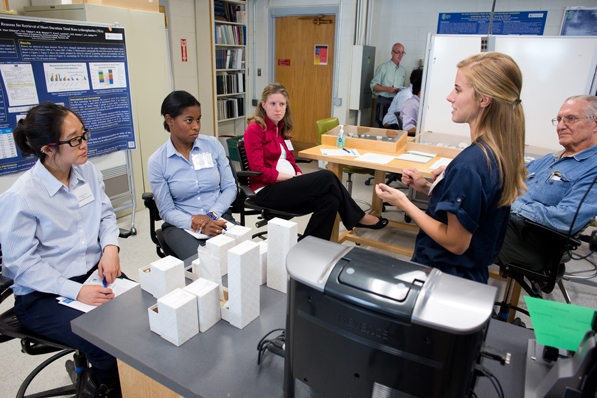 Orthopedic devices replace damaged or troubled joints and restore mobility in hips, knees, shoulders, elbows, and other parts of the body. Despite worldwide success in millions of patients, the devices sometimes fail because of wear, corrosion, infection, design and manufacturing flaws, surgical procedures or problems in the alloys—polymers, ceramics, and other materials that the implants are made of, says Van Citters.

When implants are brought to the Thayer lab, they are decontaminated, photographed, and taken apart. Laboratory staffers use measuring and imaging machines, electron microscopy, chemical analysis, and other means to evaluate the dimensions, surfaces, internal conditions, strength, functionality, and other aspects of the implants. Some damage features are obvious—large scratches, cracks, thinning, corrosion byproducts—but others are revealed only through microscopic examination. The lab results are shared with manufacturers, surgeons, and the FDA, and are presented at scientific conferences and in peer-reviewed journals.

John Collier, the Myron Tribus Professor of Engineering Innovation, co-founded the school’s Biomedical Engineering Center in 1971 with Michael Mayor, emeritus professor of orthopedic surgery and adjunct professor of engineering. They pioneered the use of porous coated metal instead of bone cement in joint replacements in the mid-1970s. Mayor, a former chairman of several FDA advisory committees on orthopedic implants, and Collier, 2010 New Hampshire professor of the year, remain active in the center, which today has 16 undergraduate students and four graduate students under Van Citters.

Mayor, Van Citters, and FDA officials all say the two-day program was successful.

“Their visit went very well and I’m delighted by their enthusiasm,” Mayor says.

“They asked insightful questions that will help them improve patient safety and efficacy,” Van Citters says.

“We put a lot of effort into learning more about the entire process, and the Dartmouth program has been very helpful,” says Beth Kunkoski, a supervisory biomedical engineer at the CDRH.