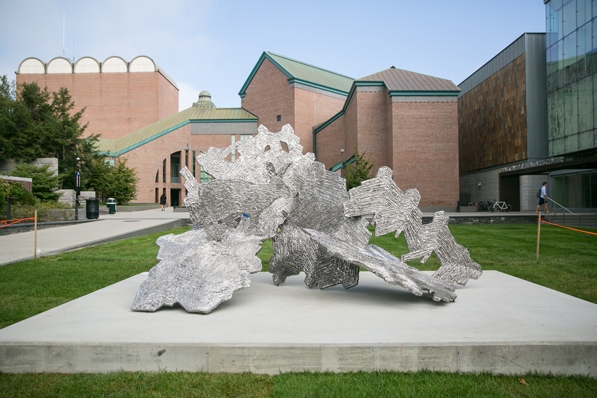 Kiki Smith’s Refuge, a 2014, stainless steel sculpture, was purchased through a gift by exchange from Evelyn A. and William B. Jaffe, Class of 1964H. (Photo by Robert Gill)

Kiki Smith, considered one of the most inventive and intuitive artists of her generation, works with a range of narratives. The female human body is a prime subject of her work, but just as often she draws upon nature, especially in her depictions of animals such as wolves, birds, owls, rabbits, and hybrid creatures. The animals are often manifestations of the artist’s deep feelings for nature. Since 1990, nature has been her dominant source for images.

Smith made her first visit to Dartmouth in 2012 and began to formulate plans for a work that would be sited on the Maffei Arts Plaza. When Smith saw the site, she became “very interested in the idea of a float as a sculpture and imagined a series of pieces based on the nature of New Hampshire and the history of Dartmouth.” Her ideas evolved, always in response to the environment of the College, into Refuge, whose material evoked the reflective and refractive qualities of hoarfrosts and winter.

“I wanted to make a sculpture that would sit close to the sidewalk, so that it would be attractive and would invite people into the campus. I wanted the students and the larger community passing through the space, and also people on the street, to see it. I purposely made something that would be dynamic and used images that are accessible to the general public,” Smith writes.

Professor of Studio Art Brenda Garand serves on the Public Art Committee and recently echoed Smith’s sentiments. “It is so exciting to have the sculpture Hoarfrost with Rabbit by Kiki Smith permanently sited at Dartmouth College,” says Garand. “Kiki is one of the most important and influential artists of the 21st century, and I often show her work to students. Now instead of looking at a flat image, we will be able to walk to her sculpture during class and discuss it.”

(As Smith’s thinking about the piece evolved, she decided to change the title from Hoarfrost with Rabbit, as it had been called in her Pace Gallery exhibition, to Refuge.)

The new sculpture is near Dartmouth Panels, Ellsworth Kelly’s commissioned work that was installed in 2012 on the east wall of Spaulding Auditorium.