Ten members of the Faculty of Arts & Sciences have been appointed to endowed chairs. 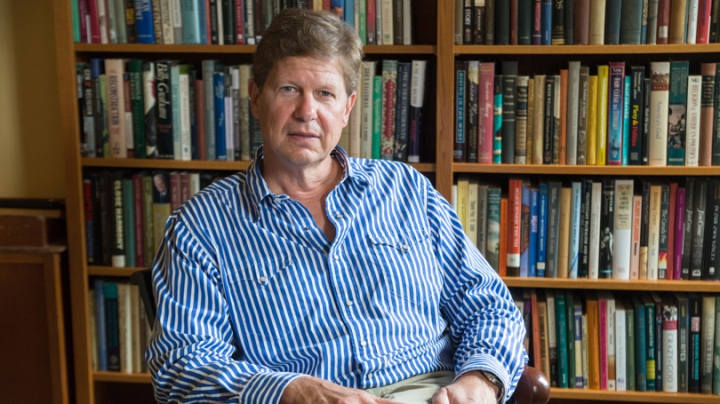 “I don’t believe that you can understand American history and culture without understanding the role of religion, and that has informed my intellectual agenda,” says Randall Balmer, the John Phillips Professor in Religion. (Photo by Eli Burakian ’00)
9/28/2015
Body

This is the first in a series of profiles of the 10 new endowed professors in the arts and sciences.

A professor of religion, chair of the religion department, and director of the Society of Fellows, Randall Balmer joined the Dartmouth faculty in 2012 after nearly three decades at Columbia. He is a prolific scholar of American religious history, and his op-eds have appeared in publications from The New York Times to the Anchorage Daily News. A frequent commentator on network television and NPR, he has also made several documentaries for PBS, including the Emmy-nominated Mine Eyes Have Seen the Glory, based on his book of the same name. His most recent book is Redeemer: The Life of Jimmy Carter.

What being named to this chair means:

The John Phillips Chair is the oldest endowed professorship at Dartmouth, founded, as I understand it, with 32 pounds, 10 shillings, a wood lot, and 285 bushels of wheat. My wife keeps asking me where the wood lot is.

I don’t believe that you can understand American history and culture without understanding the role of religion, and that has informed my intellectual agenda. And religion in America has been profoundly shaped by the cultural and historical context of the United States, so that interests me as well. I published a biography of Jimmy Carter last year and have edited a volume coming out in the fall on Mormonism and politics in America. I’m about to leave for Alaska, where I’m doing a television documentary on the Russian Orthodox Church. I’m not exactly sure what the next big book is. I’m leaning toward another biography, but I think between projects it’s not a bad idea to see what percolates naturally to the top.

I was attracted to Dartmouth initially because of the geography. I love being up here in New England. But Dartmouth has a wonderful history of caring about undergraduate education, and that was a major pull. The people here, particularly in the religion department, were an important factor as well. I wanted a place where I could continue my scholarship, and Dartmouth bends over backward to encourage scholarship among the faculty.

On communicating scholarship to the public:

Scholars too often speak only among themselves, in rarefied vocabularies. I think one of the reasons we’re in the mess we’re in as a society is because people who actually know something refuse to communicate that to the public. In graduate school I made a vow that I would never allow my work to become so recondite that I couldn’t communicate with a larger audience.