Susan Brison is the Eunice and Julian Cohen Professor for the Study of Ethics and Human Values. 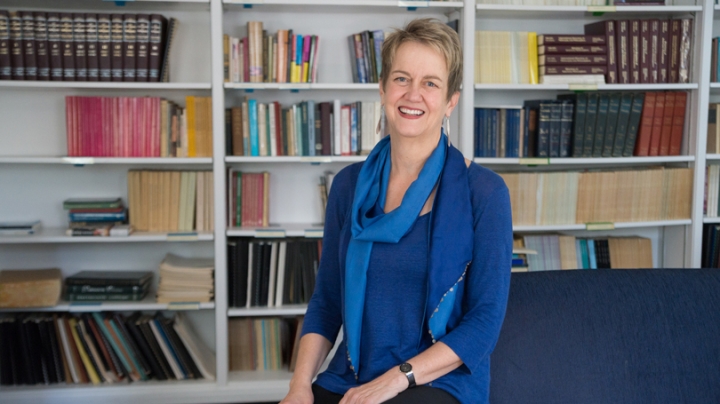 “I’m working on controversies concerning freedom of expression in the age of the Internet. As a philosopher, I’m interested in the rationale for providing special protections for speech, given that we know that speech can be harmful and can conflict with other things we value, such as privacy,” says Susan Brison, the Eunice and Julian Cohen Professor for the Study of Ethics and Human Values. (Photo by Eli Burakian ’00)
9/29/2015
Body

This is the second in a series of profiles of the 10 new endowed professors in the arts and sciences.

Susan Brison has been a professor of philosophy at Dartmouth since 1985, and also teaches in the Women’s, Gender, and Sexuality Studies Program. She has chaired the philosophy department and served for eight years as faculty director of the East Wheelock Cluster. A feminist philosopher specializing in free speech theory, she works at the intersection of philosophy, law, and politics. She’s been a visiting professor at Tufts, NYU, and Princeton; a Mellon Fellow in the Program in Law, Philosophy, and Social Theory at NYU; and an NEH-funded member of the School of Social Science at the Institute for Advanced Study in Princeton, N.J. She has published her scholarship widely in academic journals and university presses, and has contributed articles and op-eds to TIME, The New York Times Magazine, and The Chronicle of Higher Education, among other media outlets.

It’s very gratifying to have the College recognize work in feminist philosophy. I also appreciate that the title highlights the significance of the study of ethics and human values in a liberal arts education.

I’m working on controversies concerning freedom of expression in the age of the Internet. As a philosopher, I’m interested in the rationale for providing special protections for speech, given that we know that speech can be harmful and can conflict with other things we value, such as privacy. Last spring I organized the Gender Research Institute at Dartmouth (GRID) spring seminar, “Just Words? Free Speech and Social Change,” and I also hosted a workshop with a colleague from Australia that brought together free speech theorists from around the world to talk about hate speech and how the international community should be dealing with it.

This is a place where one can be valued as a complete person. I’m able to be a teacher-scholar here and bring my whole self to the task. It’s due partly to the smallness of the place and to the fact that Dartmouth is fundamentally a liberal arts college but also a major research university. This enables me to do things—direct this GRID seminar, be part of humanities institutes, work with scholars from other disciplines—that would be harder to do elsewhere. I’ve been able to have fellowships at other institutions and, with Dartmouth’s support, go to conferences around the world to meet with other scholars. But I’m always happy to return to Hanover, where one of my favorite things is performing jazz with local musicians. To perform for the Dartmouth Swing Dance Club and watch students, faculty, and community members dancing together in Collis Commonground is just a blast.