Opera for Everyone: Making the Next DartmouthX Class 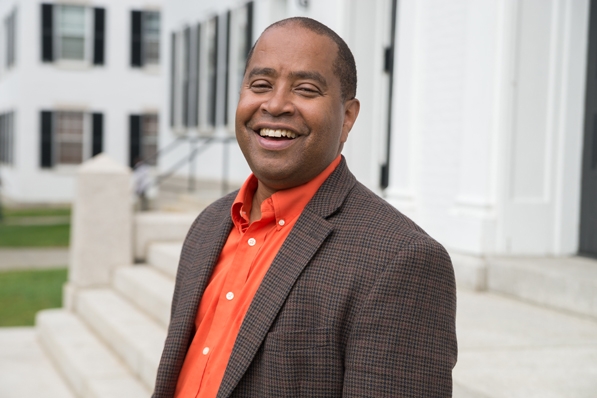 “The stories that happen on these operatic stages are our stories, told in a language—music—that exceeds the capacity of human words to convey,” says Professor Steve Swayne. (Photo by Eli Burakian ’00)

For the past year Nemeroff has been collaborating with Steve Swayne, the Jacob H. Strauss 1922 Professor of Music; video producer Dan Maxell Crosby; and music librarian Pat Fisken to develop “Introduction to Italian Opera”—the third DartmouthX massive open online course, or MOOC, that the College has produced in conjunction with the nonprofit online learning consortium edX. “They jokingly call me ‘the first student’ of the course,” Nemeroff says, punning on his first name (Swayne and Maxell Crosby are the team’s punmeisters).

The free six-week course, also known as “OperaX,” launches for all students Oct. 13—and is open for registration now.

Why study opera? “The stories that happen on these operatic stages are our stories, told in a language—music—that exceeds the capacity of human words to convey,” says Swayne. “That’s why opera matters, across classes, across cultures.”

Swayne says OperaX has something to offer for both opera neophytes like Nemeroff and those with prior knowledge. The course is organized in two three-week “acts.” The first, which begins with a deep dive into Mozart’s The Marriage of Figaro, focuses on giving students a set of listening tools that they can then apply more independently in the second.

“Steve wants to make opera accessible to anybody,” says Nemeroff. “When I started to understand that the music itself was supposed to convey the drama, it opened it up. I felt like I could love this.”

The course features Swayne’s video lectures—filmed by Maxell Crosby in Hanover and in Vienna, where Swayne led a foreign study program last spring—as well as “Opera Tuning” opportunities in which students listen and respond to operas and evaluate their own and each other’s work. Students will have the chance to reflect on their own learning throughout.

OperaX will also make use of the edX discussion boards, live office hours streamed with Google Hangouts on Air, and social media tools like Twitter and Facebook—with the aim of broadening participants’ engagement, both with Swayne and the course team and with each other.

“We want this course to be a community—not only us downloading information to people’s laptops. We want to encourage people to interact with one another in the learning process,” says Swayne.

A key goal of the DartmouthX program is to bring the lessons learned from the process back to benefit the residential classroom experience. Swayne says working closely with an instructional designer has helped him think about how he structures his Dartmouth classes.

“Information is at students’ fingertips far more readily than it ever has been before, and the amount of information has expanded exponentially,” he says. “So we as instructors need to focus more on teaching students ways of weighing information responsibly.”

The DartmouthX project is helping to build collaborative relationships across campus. “It’s been nice to work closely professors and students on something directly related to the mission of the College, which is education and teaching,” says Maxell Crosby.

OperaX is already affecting the undergraduate experience of students like Min Ji “Susana” Kwon ’17, who spent the summer working as a teaching assistant for the course.

“This is the first time I’ve been exposed to online education, and it’s fascinating,” she says. “I’ve learned a lot about the technical aspects, like how much goes into editing a video or making an assignment that will make sense online. It has challenged me.”

An English major and member of the Dartmouth Glee Club who is deciding whether she will double-major in music (“I only need four more courses, so it will probably happen”), Kwon learned about OperaX while on the music department’s spring foreign study program in Europe. “I’m excited to see how people respond to Steve, because he is a character,” she says. “He makes even the smallest thing interesting because he’s so passionate about the subject. I can’t wait for this class to launch so people can get as excited about opera as I am.”

The first two DartmouthX courses—“Introduction to Environmental Science,” taught by Andrew Friedland, the Richard and Jane Pearl Professor in Environmental Studies, and “The Engineering of Structures Around Us,” with Vicki May, an associate professor at Thayer School of Engineering—launched last year. A fourth, on the literature of the American Renaissance, with Donald Pease, the Ted and Helen Geisel Third Century Professor in the Humanities, and James “Jed” Dobson, a lecturer in writing, is in the works.