In an unprecedented discovery, an international team of more than 60 scientists, including Dartmouth paleoanthropologist Jeremy DeSilva, has found over 1,600 fossils of a new human ancestor in Rising Star Cave in South Africa. 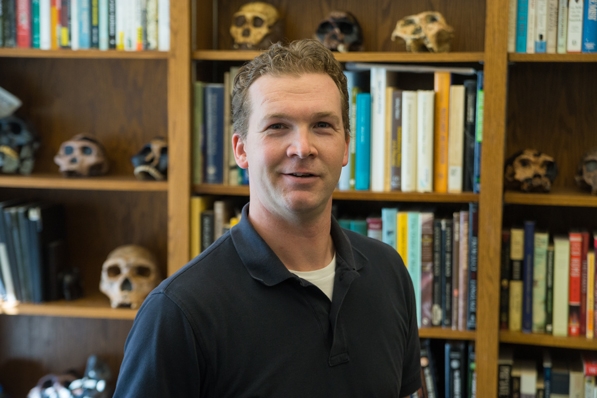 Paleoanthropologist Jeremy DeSilva is among the scientists who discovered a new human ancestor in a cave in South Africa. (Photo by Eli Burakian ’00)

“Such a rich trove of fossil specimens is unparalleled,” says DeSilva, an associate professor who joined the Department of Anthropology in July.

“The site of the famous Lucy skeleton only yielded up about 400 fossils after years of excavation. Leakey’s Olduvai Gorge produced just 80 fossils ever. But at Rising Star, two women in one week dug out 600 fossils, including a complete foot, a complete hand, and a snout. It’s amazing,” DeSilva says.

The new ancestor has been dubbed Homo naledi—from naledi, the word for “star” in the Sotho language, referring to the site of its discovery.

The extraordinary cache represents at least 15 individuals, probably entombed at the same time at the site. “This could be the earliest evidence of deliberate disposal of the dead,” says DeSilva. 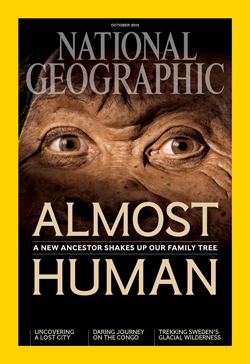 Paleoartist John Gurche used fossils from a South African cave to reconstruct the face of “Homo naledi,” the newest addition to the genus “Homo.” (Photo by Mark Thiessen/National Geographic)

A test trench revealed that there might be thousands of fossils below, with bodies stacked on top of each other.

The team, led by Professor Lee Berger of the University of the Witwatersrand, in South Africa, first learned of the cave’s contents from cavers conducting a geological exploration in late 2013.

DeSilva, a specialist in the locomotion of ancient apes and early human ancestors, is an expert in the functional anatomy of the human foot and ankle. He has also studied the bone structure of the ankles of chimpanzees, humans’ closest living relatives. However, in 2010, he homed in on fossils, joining Berger to analyze the foot and leg of Australopithecus sediba, a contender for an early position in the human lineage. While teaching and doing research at Dartmouth, DeSilva will continue to collaborate with Berger on H. naledi.

“We are thrilled to welcome Jerry DeSilva to Dartmouth,” says Sienna Craig, associate professor and chair of the Department of Anthropology. “His participation in the Rising Star Expedition represents a significant contribution to the chronicling of evolutionary history, expanding the breadth and depth of knowledge about our early human ancestors and the human condition. Jerry’s collaborative efforts as part of Rising Star will also allow him to bring this work to life, in real time, with our students.” 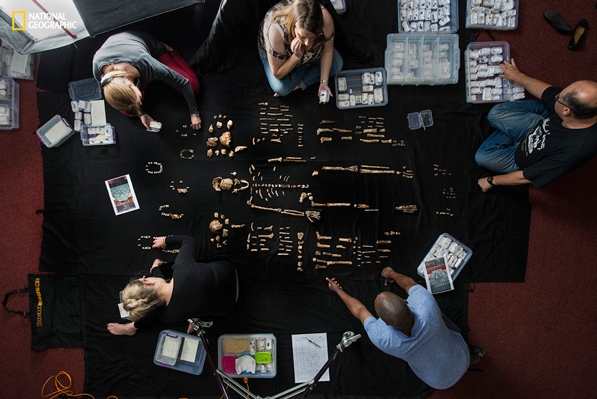 Today, two papers about the discovery were published in the journal eLife. One is a major treatise that details the discovery, provides an overall description of the find, and announces the naming of H. naledi. DeSilva contributed to the paper with a description and a functional analysis of the creature’s feet and legs. The second paper in the journal delineates the physical context of the fossils.

Team members describe the collection as the richest assemblage of associated early human fossils ever discovered, comprising females, males, and children. “It has the most comprehensive representation of skeletal elements across the lifespan, and from multiple individuals, in the hominin fossil record,” they write.

The discovery of H. naledi reflects a changing perspective in paleoanthropology. The conventional wisdom, says DeSilva, has been that human fossils are the scarcest, most sought-after things on Earth, and that even gold and diamonds are easier to find than human fossils.

“At least that has been the narrative,” says DeSilva. “Now Berger tells us, ‘I don’t think they are. I think we have just been looking in the wrong place. We find a cave that has lots of fossils, so we just go back and dig every year.’

“Berger has a new vision, which is to bring back exploration instead of repeatedly returning to the same site. Using satellite imagery and then Google Earth, he has been seeking patterns as to where more caves can be found,” DeSilva says.

“The caves are vertical; they pool water at their base; seeds fall in and olive trees sprout in an otherwise grassy classic African landscape. Patches of olive trees are bullseyes for caves. To date, Berger has found 300 new caves.” 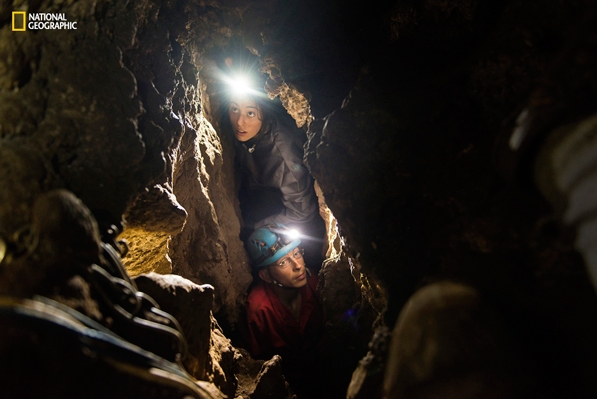 Lee Berger’s daughter, Megan, acting as a safety caver on the expedition, and underground exploration team member Rick Hunter navigate the narrow chutes leading to the Dinaledi Chamber of the Rising Star cave in South Africa where fossil elements belonging to H. naledi, a new species of human relative, were discovered. The find was announced by the University of the Witwatersrand, the National Geographic Society and the South African National Research Foundation and published in the journal “eLife.” (Photo by Robert Clark/National Geographic)

To ascertain the contents of these caves, Berger reached out to spelunking groups in South Africa. He needed cavers who knew about bones and were small enough to squeeze through the caves’ unusually tight openings.

“Six women became Lee’s ‘underground astronauts,’ made up of anthropology and archaeology grad students, postdocs, and early professionals,” says DeSilva. They were critical in reaching the deep, narrow chamber where H. naledi was found.

As to the hundreds of other caves, DeSilva says they all differ. “Some have fossils and will eventually be excavated, while others appear barren. The project is very much in an exploration stage.”

While the Rising Star discoveries are reshaping the history of the human lineage, there are unanswered questions, such as exactly where H. naledi fits in the timeline. Unlike with most other fossil-bearing deposits, the discovery site has no volcanic ash that might contain radioactive elements that could be dated. There are also no remains of animals of known geologic age in proximity to the human fossils that could help with the dating.

But DeSilva says, “All hope is not lost.”

The fossils were found on the cave floor and in beds of soft silt and clay. Occasionally the “astronauts” found bits of limestone that had fallen in from the wall and ceiling, and mingled with the skeletal remains. “It provides some context,” says DeSilva. “If those can be dated, we might be able to learn when they fell onto the floor and mixed in with the rest of the material. My guess is a year from now, we are going to know how old these are,” he says.

“It is frustrating, in a way, that we don’t know how old these are but anatomically, I know where all these fit in our story of human evolution, right in that early Homo transition from an Australopithecus to a Homo erectus.”