Rassias Partnership With Mexico Is Having an Impact

When Paula Amador talks about her students back in Guadalajara, she holds back tears. They’ve just texted her the results of their high school entrance exams—a high-stakes test that determines whether or not they will be able to continue their educations. 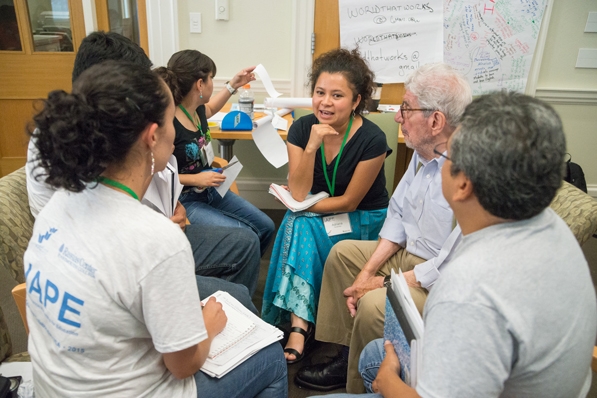 Amador is speaking in Hanover, where she spent two weeks this summer participating in an intensive training for Mexican English language teachers in the Rassias Method of language instruction.

The annual program, part of the Inter-American Partnership for Education (IAPE, pronounced “YAH-PAY”)—a Clinton Global Initiative commitment that is a partnership between Dartmouth’s Rassias Center and the nonprofit Worldfund—has brought the trademarked Rassias Method directly to nearly 2,000 Mexican teachers.

The Rassias Method of language learning, developed by William R. Kenan Professor Emeritus of French and Italian John Rassias in the 1960s for the U.S. Peace Corps, emphasizes immersion and theatricality to break down psychic barriers to communicating expressively in a new language.

The IAPE teachers, or IAPEañeros, as they call themselves, are so far reaching a half-million students like Amador’s, and have in turn provided training, mentorship, and support in the technique to more than 10,000 Mexican public school teachers.

And now the IAPE program has more data behind it. Last year, the InterAmerican Development Bank (IDB) published peer-reviewed results of a randomized control trial indicating that teachers trained through IAPE are helping students improve their English better than teachers trained in more traditional methods.

“They found that, compared to the control group, the IAPE teachers spoke more English in class, spent more class time involving the students in interactive activities, less time with students seated at their desks doing silent busy work—and students spent more time listening to and speaking English in class,” says Jim Citron ’86, IAPE’s director, who notes that IDB’s report is one of the few such rigorous studies of the efficacy of in-service teacher training and the first, to the authors’ knowledge, to show results in student learning outcomes.

In addition to finding that students taught by IAPE-trained teachers achieved greater proficiency in English compared to the control group, a significantly greater number also expressed confidence that they would pursue higher education and have a job by age 30.

As the most widely spoken language in the world, English is increasingly essential to survival in a global economy, says Worldfund founder Luanne Zurlo ’87. Zurlo says she was inspired to launch IAPE after a meeting with the head of a large American corporation based in Mexico City.

“We met in this beautiful new neighborhood of Mexico City. On the hill nearby were slums, and he said, ‘I would love to hire people from that neighborhood, but even our lowest job requires English.’ I realized that English is a huge barrier globally to people breaking out of poverty and into the formal job sector.” Zurlo enlisted the help of the Rassias Center, and in 2007 the IAPE partnership was born.

To date, 23 Dartmouth students and alumni have participated as IAPE instructors at the program’s training center in Mexico. Marianna Cid ’14 became involved with the program as an undergraduate and is working at the center this fall. “IAPE matters because it empowers Mexican teachers to instill their students with the knowledge, attitude, and English skills that are needed to bring a positive, lasting change to Mexico,” she says. “I feel beyond privileged for having had the chance to have formed a tiny piece of the intricate IAPE web/mosaic that continues to grow.”

IAPE’s academic coordinator, Raul López, first attended an IAPE session in Hanover in 2008. “When I started using the method with my students in Mexico, I saw immediate improvement in their learning,” he says. “I was teaching something and the next day they were able to remember everything I said—and the next week they remembered what we learned the week before. So the impact is huge. This really works. And it’s fun, for the students and for the teachers.”

López now runs IAPE’s training center in central Mexico, and, along with fellow IAPE team members Leslie Alvarado and Julieta Sánchez, is helping to organize the IAPEañeros into a nationwide network of teachers and administrators who share ideas and support each other’s efforts to spread the method and the IAPE mission.

“Mexico has a huge need for good educators and good education,” he says. “I have no words to explain how good IAPE is. As the IDB study shows, we are really making a difference.”