The Hopkins Center for the Arts’ 2015-16 film season opens with six films straight from Colorado’s famed Telluride Film Festival—including two star-studded ensemble casts: one reenacting the struggle for women’s voting rights in Great Britain, and the other uncovering pedophile priests in Boston. The lineup also includes a film portrait of Nobel Peace Prize winner Malala Yousafzai, and dramas taking the viewer into rural Guatemala and Iceland. 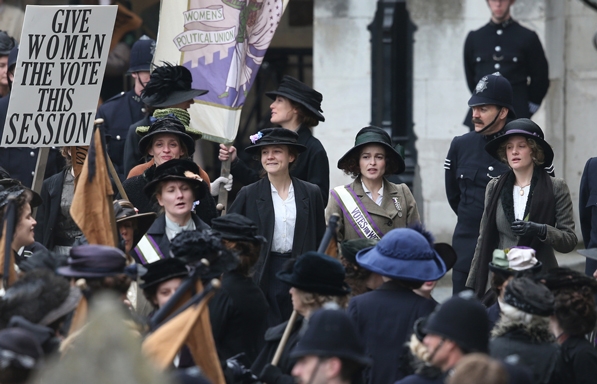 Telluride at Dartmouth runs Friday, Sept. 18, through Thursday, Sept. 24. All shows are in Spaulding Auditorium.

The Telluride festival, occurring each Labor Day weekend in Colorado, has long been considered one of the premier arts events in the country. Each year, hundreds of cinema lovers flock to the small mountain town to immerse themselves in a three-day celebration of film. Telluride consistently presents a remarkable and diverse slate: the rare and unknown, restored gems, retrospectives and the latest (and greatest) from the upcoming season. The New York Times calls Telluride “the smallest, most original, and most stimulating of the major festivals.”

Telluride at Dartmouth started 30 years ago, the result of a long-standing relationship between the festival and College. Each year, six films come directly from Colorado for special advance screenings at the Hop, offering an opportunity for the Dartmouth community to get a sneak peek at the latest international films—often months before they’re released.

Selections this year include: 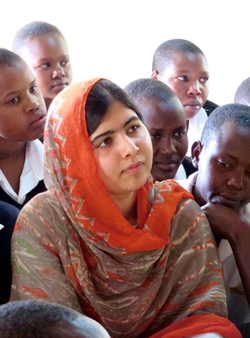 A scene from “He Named Me Malala.” (Courtesy of Fox Searchlight)

Three years ago, 15-year-old Malala Yousafzai was shot in the head by the Taliban for her advocacy of girls’ education in her native Pakistan. Acclaimed filmmaker Davis Guggenheim (An Inconvenient Truth, Waiting for Superman) tells the miraculous story of Malala’s survival and rehabilitation and the inspiring guidance given by her educator-activist father, Ziauddin Yousafzai (who named her). The film chronicles her attempts to lead the life of a normal teenager, even as she travels as a spokesman for girls’ rights and speaks at the U.N. She recently became the youngest-ever recipient of the Nobel Peace Prize. Malala’s past and inner life are poignantly illustrated through animation, conveying her sense of the homeland she cannot return to but will always love.

In 2001, a new Boston Globe editor (Liev Schreiber) assigns a crack team of reporters (Michael Keaton, Mark Ruffalo, Rachel McAdams, Brian d’Arcy James) to investigate how Boston’s Catholic Archdiocese has handled a priest’s sexual misconduct case. What they uncover is a vast secret labyrinth of suffering victims; self-serving institutional hypocrisy from the Church; and weary complacence from city officials. Writer-director Tom McCarthy (The Visitor) has crafted a script that combines speed, wit and devastating compassion. Though viewers may think they know the story, Spotlight is filled with twists and surprises, making for storytelling that’s thrilling and yet grounded with substantial gravitas.

In 1900s London, Maud (Carey Mulligan), a hopeless, exhausted factory worker, is lured by her co-worker into the women’s rights movement. It is a crucial moment: After years of struggle, leaders Edith New (Helena Bonham-Carter) and Emmeline Parkhurst (Meryl Streep) are losing patience with nonviolent protest. Director Sarah Gavron (Brick Lane) depicts, with intensity and clarity, the surprisingly vicious battle to get the vote, providing balance via an articulate but adversarial policeman (Brendan Gleeson). Gavron also connects the battle to the great surge of working-class radicalism at the same time that changed the course of history.

At the base of an active volcano, in a region long inhabited by Mayan people, Maria’s family prepares for her marriage. The teenage girl, however, has other ideas. With one drunken encounter, she alters her fate and that of her family. Jayro Bustamante’s masterful debut begins as a lovely immersion into contemporary rural Guatemalan culture. Himself a native, Bustamante is a remarkable tour guide, revealing the ways of the local people. But as the story takes several dramatic turns, Bustamante reveals that he has ambitions far beyond either the coming-of-age film or the typical tradition-versus-modernity tale. Ixcanul has been a winner at multiple festivals, including The Berlin International Film Festival.

Two aging men—brothers and next-door neighbors locked in a decades-long feud—go to comical extremes to avoid any contact. Gummi is shy and quiet but essentially decent, while Kiddi is a bombastic, misanthropic drunk. They do, however, share a lifelong dedication to their sheep. When one of their animals contracts a contagious disease, the livelihood of the brothers and their neighbors is threatened. Writer-director Grímur Hákonarson, a master of mournful, wordless comic set pieces, makes maximum expressive use of the bleakly beautiful Icelandic mountain landscapes. But it’s the almost wordless main performances that lead to an unexpectedly passionate resolution. Who could have expected Iceland, sheep and septuagenarian bachelors to be this funny, and this thrilling?

On the eve of their 45th anniversary, Kate (Charlotte Rampling) and Geoff (Tom Courtenay), an intelligent, progressive, relatively healthy married couple living in rural England, confront a long-buried emotional memory that inexplicably, and seemingly arbitrarily, resurfaces. Suddenly, everything Kate and Geoff believe they know about each other comes into question. Writer-director Andrew Haigh (Weekend) delicately reveals the fault lines, mysteries, and uncertainties that exist just beneath the surface of what may seem to be the most harmonious of human relationships. Critics say Rampling and Courtenay offer some of the finest work of their long careers, turning 45 Years into one of the most subtle, powerful, and devastating British dramas in recent memory.