What began as a research project in an undergraduate sociolinguistics class propelled two Dartmouth graduates to win National Science Foundation funding, led them to present their findings at academic conferences, and, most recently, has the pair looking forward to seeing their work published in a scholarly journal. 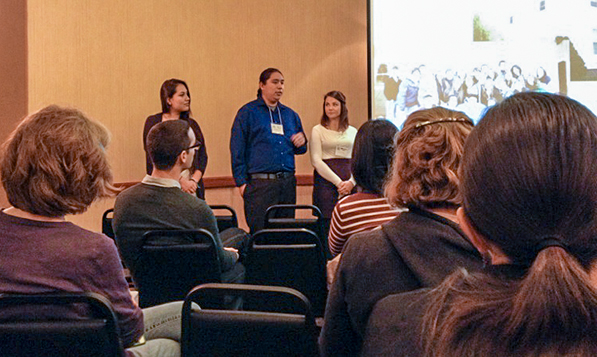 A number of current students have been helping with the project. From left, are Maggie Seawright ’17, Zachary Cooper ’17, and Sydney Allard ’16. The three students presented a talk with alumni Kalina Newmark ’11  and Nacole Walker ’11 at a sociolinguistics conference in Chicago in the fall of 2014. (Photo courtesy of James Stanford)

Kalina Newmark ’11 and Nacole Walker ’11 are studying and writing about a set of distinctly Native dialect features of English spoken in North America. Their work is expected to be published in a forthcoming issue of the University of Pennsylvania Working Papers in Linguistics, a publication of the Penn Graduate Linguistics Society. They are also planning an article for a peer-reviewed journal.

Newmark praises the level of commitment and support that James Stanford, an associate professor of linguistics, gave to their work from the very beginning. “Nacole and I were encouraged by his vision that our project could have genuine influence,” she says.

During a sociolinguistics class at Dartmouth, the students came up with an idea about studying Native American English on campus for a small-group research project, says Stanford.

“Little did we know how far their research would take them, or how significant their work would be in laying the groundwork for Dartmouth undergraduates who are building on Kalina and Nacole’s work,” he says.

The students’ work is just one example of the original research that Dartmouth students undertake each year with faculty mentors, much of which is published in scholarly journals or presented at academic conferences.

“Many of our students say that their research projects are among their most valuable experiences at Dartmouth,” says Cecilia Gaposhkin, assistant dean of the faculty for pre-major advising. “Through their research, our students develop the critical thinking and information-processing skills that help them make decisions about the challenging academic work they do at Dartmouth and about the fields they choose to enter after they graduate.”

Newmark, a member of the Tulita Dene First Nations community, is working as a marketing communications specialist for Cargill Foodservice North America in Minneapolis. She plans to pursue a joint degree in business and public policy to address the political, economic, and social needs of Native American and Aboriginal people in the U.S. and Canada. She is also a graduate of the Tuck School of Business Bridge Program. Walker is a member of the Standing Rock Tribe (Lakota/Dakota), and she is the tribal education programs coordinator for her tribe’s Department of Education, where she facilitates a language revitalization program. She is also pursuing a master’s degree in education at the University of Mary in Bismarck, N.D.

A number of current students have been helping with the project as well. Zachary Cooper ’17, Maggie Seawright ’17, and Sydney Allard ’16 presented a talk with Newmark and Walker at a sociolinguistics conference in Chicago in the fall of 2014.

Several elements of the NSF-funded research stand out, says Stanford. “First, all of the fieldwork was conducted by Native American co-authors as participant-observers, thus providing culture-specific perspectives.”

Second, the scope of the study, especially in the broad range of respondents, is noteworthy. “Prior work on this topic has rarely considered more than one or two local tribes at once,” Stanford says. Three field sites across North America have been studied for this project: the Standing Rock Reservation in North Dakota and South Dakota; a Sahtu Dene community in Northwest Territories, Canada; and the diverse Native community at Dartmouth.

“Evidence collected by the study shows that some Native Americans from different tribes report a shared linguistic experience, particularly in a set of intonation and timing features,” Stanford says. “As one study respondent puts it, ‘There’s sort of a Pan-Indian [English] dialect that exists, that people who aren’t Native might not understand.’ ”

Newmark says she and her fellow researchers are mindful of the positive results this research could have on Native children, especially as she recalls her own experience as a child. “I first learned English from my mother, whose first language was her tribal language,” she says.

Says Stanford, “When we recognize that all dialects of English are logical, orderly, linguistic systems, this perspective can be valuable for inter-cultural understanding and community identities.”

Extending that recognition to the Native dialect they are studying would be affirming and empowering for Native people, Newmark says.

As the team writes in its forthcoming paper, “Native people have found a way to construct their ethnic identity through a foreign language (English). Among diverse tribes and across vast distances in North America, they are using English in a resilient and distinctive way, countering the assimilationist efforts of the past, and creatively building their own modern Native American future.”

The research project, Newmark says, has been meaningful personally, as well. “This work honors the values, prized in Native communities, of connecting across the generations and helping those who come after you to continue to be uplifted, to help them better themselves,” she says. “Professor Stanford has brought new students into the project to carry on the work we started, and that’s good.”