Anthropologist: New Human Ancestor’s Feet Are Like Our Own

As a specialist in matters of the foot, Dartmouth anthropologist Jeremy DeSilva has taken a long, hard look at Homo naledi, the latest addition to the human ancestral lineage. 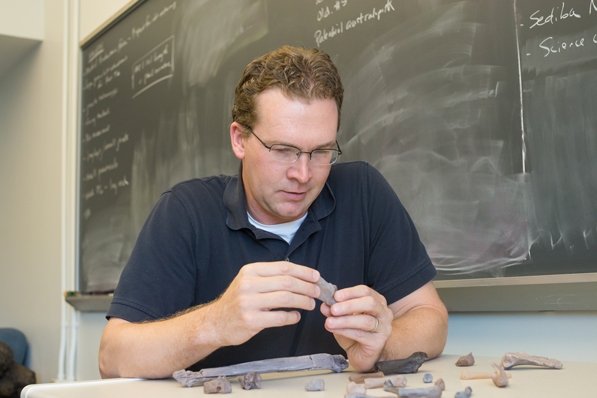 Of the 1,600 fossil fragments of this creature recently recovered from the Rising Star Cave in South Africa, 107 are the remains of feet. The remains include one nearly complete adult foot and assorted parts provisionally assigned to two other adults and a juvenile.

DeSilva, who joined Dartmouth’s Department of Anthropology in July, has an established track record in fossil feet. He previously described the foot and leg of Australopithecus sediba, a human precursor nearly 2 million years old, found in another cave a few miles from Rising Star.

Professor Lee Berger of the University of the Witswatersrand, discoverer of A. sediba, is now the project leader of the Rising Star Expedition.

With the work on A. sediba behind him, DeSilva welcomed the opportunity to analyze and interpret the foot of H. naledi. DeSilva is senior author of a paper on his findings, just published in the journal Nature Communications.

The foot and ankle of H. naledi are very much like those of modern humans in form, structure, and probable function, he says. “It was a striding long-distance traveler with an arched foot and a non-grasping big toe, with subtle differences from humans today in having somewhat more curved toes and a reduced arch.

“It looks like what the foot of Homo erectus might look like. Homo erectus is the earliest human with body proportions similar to our own, with long legs, short arms. It might be closely related to H. erectus, but the brain is smaller, and it has a Lucy-like shoulder with curved fingers. This is a new combination that we haven’t seen before.”

The pelvis is more outward flaring, like that of Lucy—the famous Australopithecus afarensis. “This configuration moved the hip muscles away from the hip joints and gave them more leverage in walking, perhaps more of an advantage than humans have today. Over time, the architecture of the pelvis evolved and expanded to allow the birth of larger-brained babies.”

DeSilva says that throughout Africa there were probably all these hominins living in microhabitats, evolving very different kinds of adaptations to survive in their environments. “Humans are like every other animal on the planet. Our evolutionary history is mixed. It’s a mosaic, lots of different experiments, and we just happen to be the only one left, for whatever reason.”